The 5 Most Colorful Places In Europe

We all need colors in our lives, they influence our mood, make us happy, give us energy and inspire our imagination. For travelers, small color-painted places can be found anywhere in Europe. Viewing them through a gray landscape can immediately lift the spirit of a weary traveler, so when you need a little charge, follow these tips and you will discover the most colorful places in all of Europe.

Here The 5 Most Colorful Places In Europe 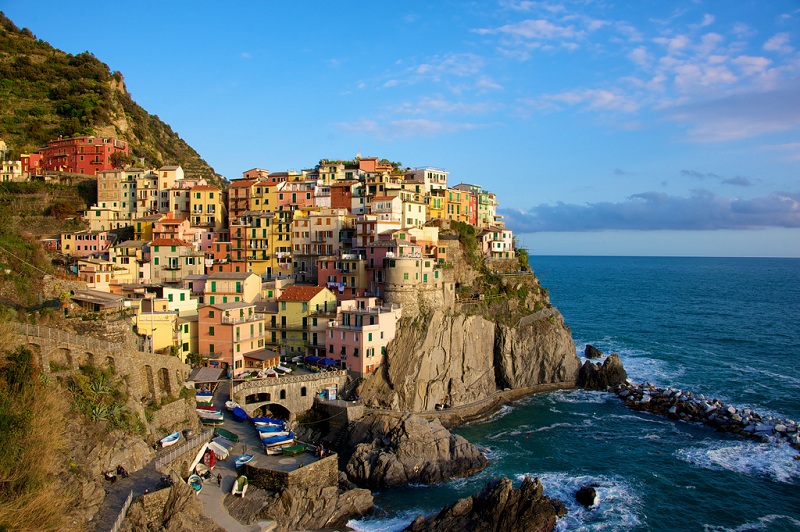 Our first stop takes us to Italy, where five small villages are made up of the Cinque Terre, located along the steep and rocky Ligurian coast like bright pearls of a necklace. While the fishing villages of Monterosso al Mare, Vernazza, Corniglia, Manarola and Riomaggiore were once accessible only on foot or by boat, today they can be visited thanks to an impressive railway that runs through hundreds of galleries, revealing an indescribable view of the sea. The Mediterranean during the journey. In the villages, some houses are perched on top of some rocks and are separated between them only by narrow alleys. In 1997 the Cinque Terre became a UNESCO World Heritage Site, this guarantees the villages that will remain in their original state. 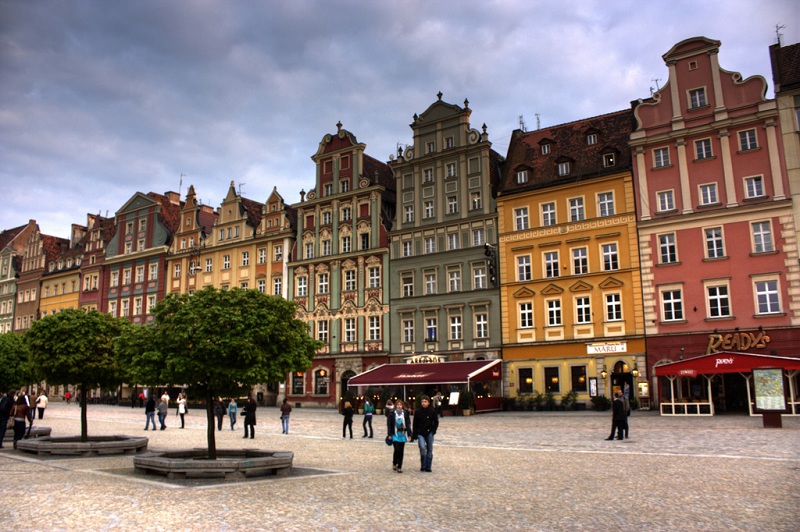 The next color mix can be found in the picturesque Wroclaw, the fourth largest city in Poland. In the middle of the historic center of Wrocław, aristocrats and wealthy merchants built their houses around the medieval Plac Solny (‘Salt Square’) to show their status. The facades of the Renaissance-style houses are embellished with decorations and ornaments. This game of colors continues in the market of flowers that takes place in the square, these are sold and traded all day until late at night, the sale takes place in front of the beautiful old and classic Stock Exchange building, located along the south coast to the side of the square. 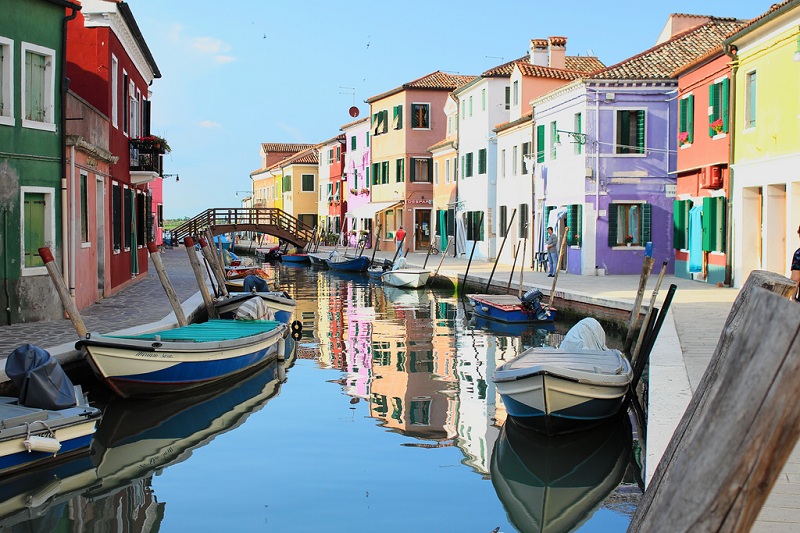 We are back in Italy, this time to talk about the Venice Lagoon and the island of the fishermen of Burano. According to legend, the fishermen of Burano had their houses painted to differentiate themselves from the neighbors, so you can find your way home more easily returning in the evening. Approaching the island, located half an hour from Venice, you can see the fishermen’s houses in the distance, they seem like they have just been painted. Like Venice, Burano is separated by different channels, and in the sun the houses are reflected in the water, creating a magnificent play of colors and a true paradise for photographers and painters. 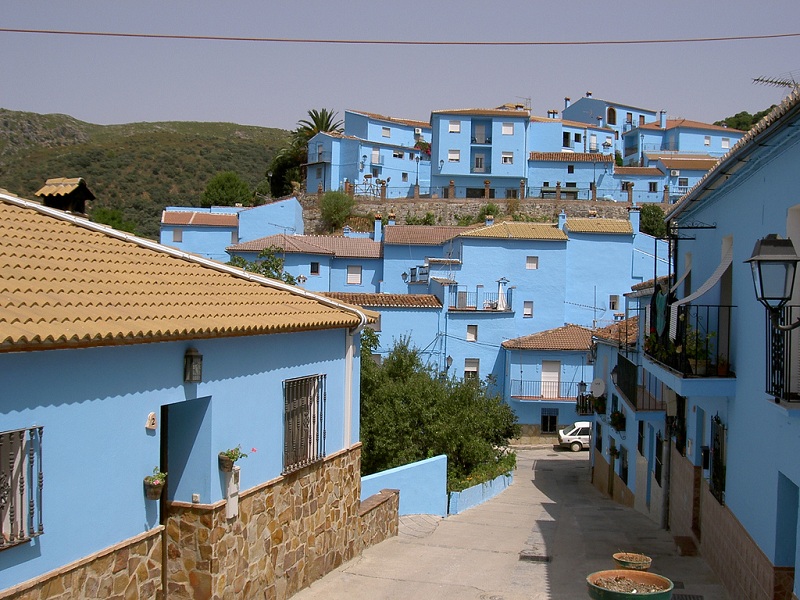 Now the strangest place of our trip, the Spanish village of Juzcar.In Andalusia, in a region known as the Pueblos Blancos (“white villages”), all of the 250 houses of the inhabitants shine with a coloring similar to the Smurfs, an intense blue. And it is precisely the tone of the Smurfs, Sony Pictures, in fact, has made sure that the country was painted blue for the premiere of the film “The Smurfs 3D”. 9000 liters of blue paint were used to transform Juzcar into the smurf village, not even the town hall and the church were spared! Although Sony Pictures requested this transformation, the village had to return to its original colors, but the inhabitants refused. The village has become a tourist magnet: a smurf-supermarket has been built and some of the inhabitants start going around the streets disguised as smurfs … 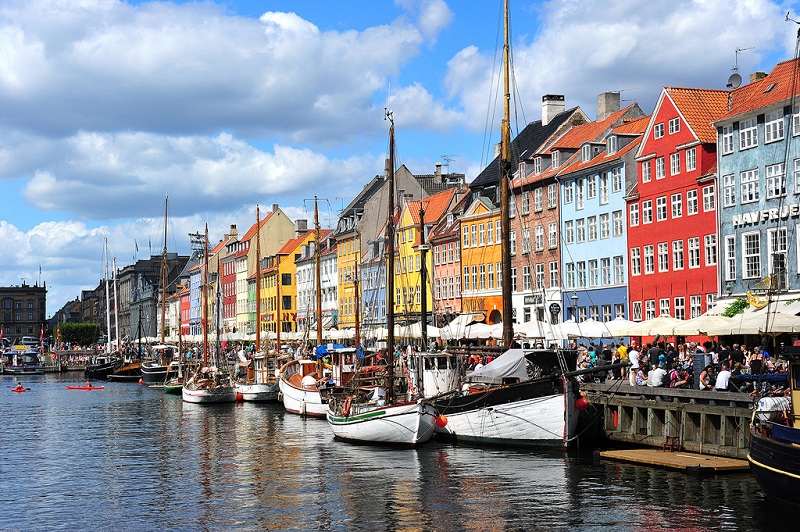 Last city, but certainly not to be missed: the row of houses along the Nyhavn in Copenhagen are shining in their shades of red, yellow, blue, ochre and green. Not only are the houses colored, the historic ships linked to the port (now mostly used as small museums) complete the maritime framework. You will find a restaurant, bar or café in almost every old house scattered along the Nyhavn, but sometimes they can be quite expensive, so you might even choose to drink your beer on the pier, surrounded by the atmosphere of the place. Alternatively, you can enjoy the view on a boat trip around the harbor and along some of Copenhagen’s many canals.