Where does Macrame come from

We might all be aware of the decorative art of Macrame. If you’ve been suitably impressed with it and fancy having a go at completing some, then a Macrame Kit might be the way forward. These can be potholders and or decorative wall hangings. They look excellent up against the wall and combined with specific colours like a teal blue or a lovely warm orange. Some hang like drapes, and others are woven into pictures or even geometric shapes. Where does this delightful artistic skill come from, and how did it make it to our shores so we can enjoy making them? 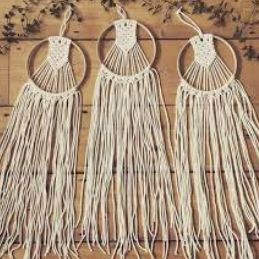 The skill of macrame is rooted deeply in the past. It was first developed in the ancient Arabic world. In this case, the world we use relates directly to the subject matter. Macrame comes from the word macramia. This means, in its literal translation, ornamental fringe. It’s precisely what the Arabs would use old pieces of rope for to decorate their homes and to provide cover for openings in the walls of their dwelling.  It was an easy way to bring something different to brighten up the house and show off their skills. The Assyrians and Babylonians were the first to use the style; they even used it to dress statues on special occasions. 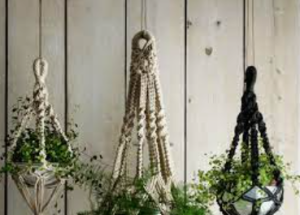 The way that Macrame came to Europe is one based on conflict. It was the Moorish invasion of Spain that brought the skill to the attention of Europe. The Moorish settlers naturally brought their art and taste to the region around Southern Spain and Portugals’ Algarve. As the Moors were slowly driven out, examples of the skill and art were generally left preserved. Macrame was one of the most impressive things they discovered.

Mary II of England, in the seventeenth century, was so impressed with the art of Macrame that she began buying up and importing examples to her court. She learned the skill herself and then began to teach it to her ladies-in-waiting. They all became very proficient.

The next group to take up the art of Macrame were trans-Atlantic sailors. The journey across the treacherous ocean was long and arduous,, but below decks, when a storm came on or when the ship’s work was done for the day, the men would macrame images and shapes from the fringes of hammocks and bell pulls. They’d also knot old pieces of discarded rope as well. These pieces would be sold at the next port to supplement the meagre income of the sailors and keep them in lodgings before they took work on a ship back across again.