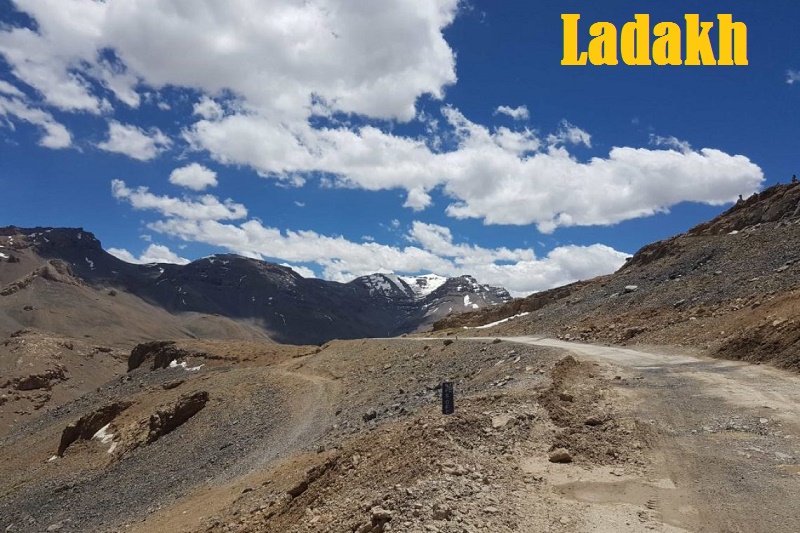 How to reach ladakh by Airplanes, buses, trains and motorcycles!

The Ladakh region is certainly one of the most spectacular areas of India. Located in the extreme northwest of the country, in the eastern part of the state of Kashmir, it is a true paradise for mountain lovers. Whether you are looking for breathtaking landscapes or spectacular treks, or you want to take a dip in the most authentic Buddhist culture between millenary monasteries and a population ready to welcome you with smile and hospitality, well, this is the ideal place for you. Here, we shortly brief how to reach Ladakh by Airplanes, buses, train, and motorcycles!

There are two alternatives to arrive in Ladakh, air or road. As the region is connected to the rest of India by Leh Airport or by a road that runs from Manali for more than 400 kilometers in the mountains. Here is a detail of the different options that you have available to get to Leh starting from Delhi. Always travel with an eye to the wallet!

How to reach Ladakh by Plane 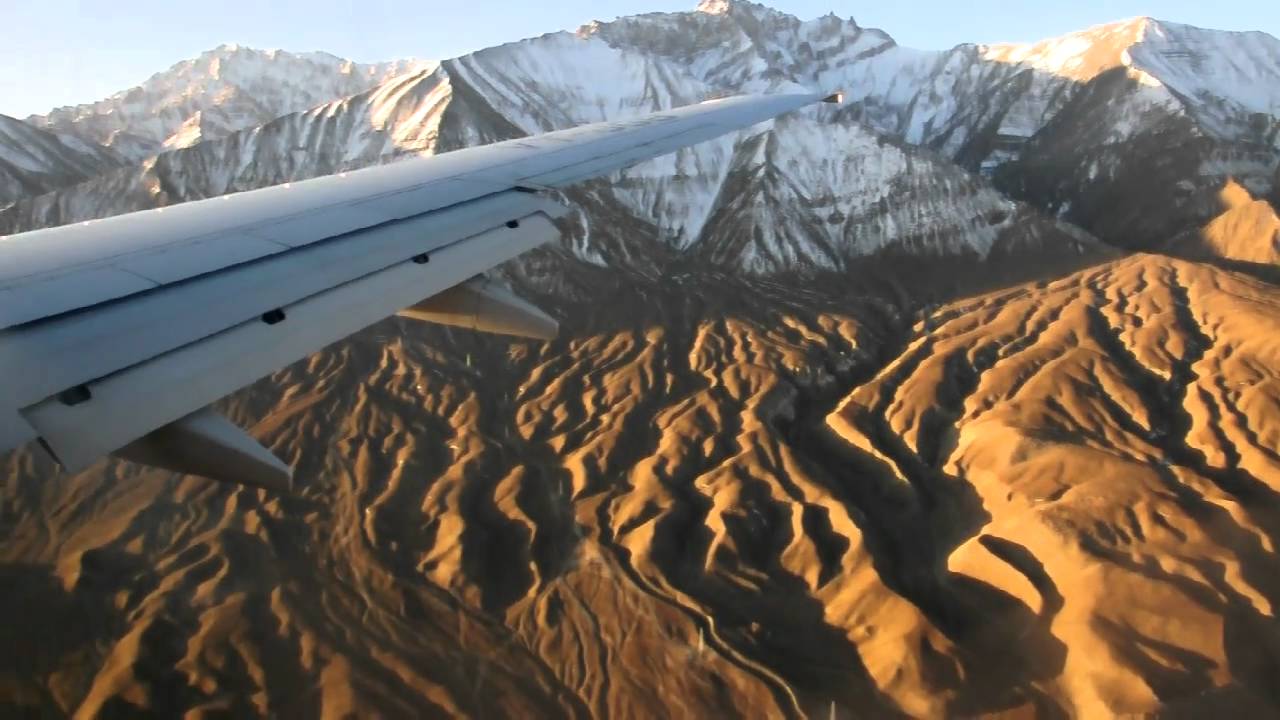 Leh Airport is connected to Delhi with numerous daily flights. The ticket price for a route is usually around 90 dollars s, even if the prices oscillate considerably during the high season. It is also possible to book a return flight directly to one of the many Leh agencies. If you are lucky, you can also find some offers at slightly more favorable prices.

An alternative to the Delhi-Leh flight may be Delhi-Srinagar, the capital of Kashmir. It ‘true that Leh and Srinagar are located more than 400km and that the public bus (daily bus, costs about 15 dollars ) takes about 24 hours to make the journey. For some reason, the flights to and from Srinagar are super cheap and are easily tickets less than 40 dollars each way. Often, even less than 30! So if you have time and maybe you want to see another area beside Ladakh, fly to Srinagar and continue to Leh can be an interesting alternative.

Beware that the political situation in Kashmir is often unstable and some curfews may be imposed for a few days. The area is even closed to tourists. I recommend a quick tour on google news simply by typing the word Srinagar before booking, to get an idea of the current situation.

Consider also the possibility of a Delhi-Leh trip and a return from Srinagar or vice versa for a spectacular tour in the Indian Northwest.

Manali is also connected to Leh, with the nearby Kullu airport. In my opinion, however, there is no valid reason to fly to Manali and then continue by coach.

How to reach Ladakh by Bus 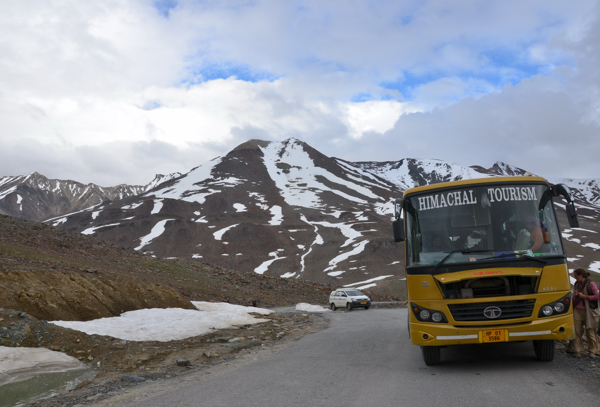 The bus is the cheapest way to reach Ladakh. If you find yourself in Delhi, you have several options to reach Leh. Surely reaching Ladakh by plane is much faster and more comfortable. Walking the 490km of Leh-Manali Highway, one of the most spectacular roads in the world that crosses three steps to over 5000 meters. It is an incredible experience. Beware that the road is open for a few months a year, usually in the most tourist flow in Ladakh, from June to the end of August. In winter the heavy snowfall makes the steps impractical and if you want to reach Ladakh in spring. Find out about the road situation before choosing the best of transport.

How to reach Ladakh by Private Buses 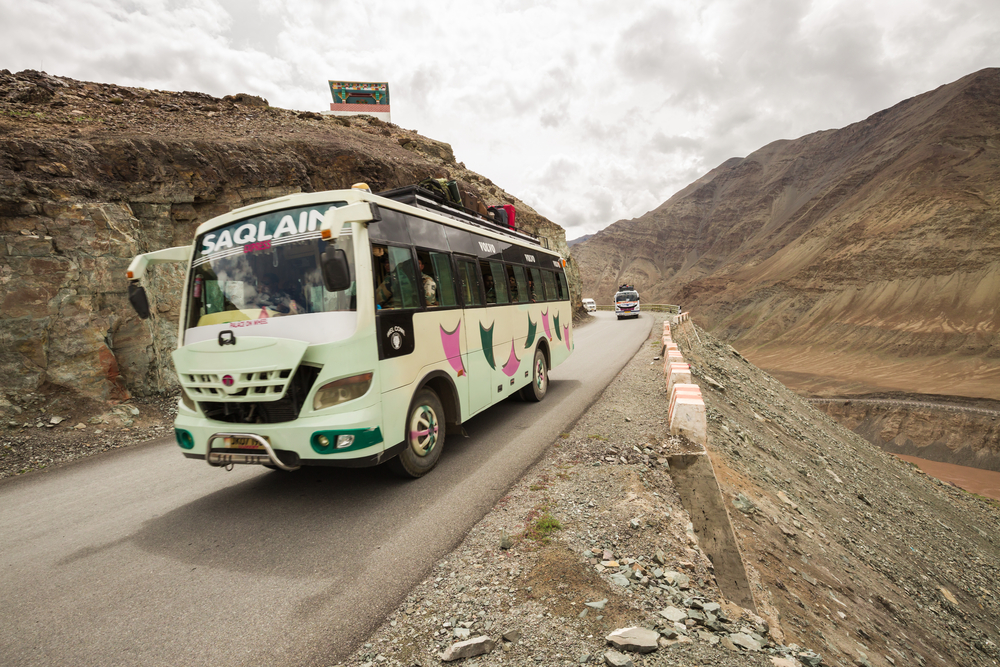 Many Delhi agencies organize private buses or minibusses that will take you directly to Ladakh from the capital of India. Most of these buses make an intermediate stop for the night, and it takes about a couple of days of travel to complete the journey. The prices of these buses are quite high, and you can even pay 60 or 70 dollars for the route. Since there are no fixed rates, you will naturally have to negotiate and be able to snatch the best price.

If you are in Manali instead you can easily find private buses or jeeps organized by agencies that for 30 or 40 dollars will take you to Leh in about twenty hours. Many of these vehicles leave around midnight to arrive at their destination in the late afternoon of the following day. 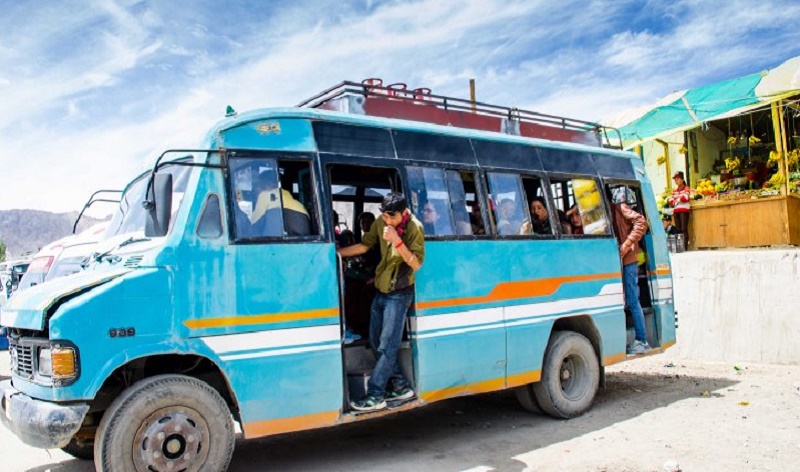 No public buses are covering the Delhi-Leh route. So, to reach Ladakh from the Indian capital you need to change at least three buses. For a total of about three days of travel, but with the advantage of spending less than 25 dollars s.

The fastest route is Delhi-Manali-Keylong-Leh. Buses from Delhi to Manali are endless, public and tourist, at any time of the day or night, and have a look at RedBus or Justdial to get an idea. The public bus costs around 650 rupees (€ 8.5) and leaves from Kashmiri Gate station, near the metro station of the same name, while for a tourist bus you get to spend 1000 or 1500 rupees (€ 13-20).

From Manali then continue towards Keylong with one of the several buses that depart during the morning. The first ride is at 4 in the morning, then at 5 and there are others until noon. For security, you can ask for information on the timetable at the station in the center of Manali. The ticket price is about 300 rupees, and the journey takes around six or seven hours.

From Keylong, a bus to Leh leaves every morning before dawn. The journey takes about 15 hours, and the cost of the ticket is around 600 rupees. Usually, you arrive in Keylong in the afternoon, you stay here, and the next morning you continue towards Leh.

How to reach Ladakh by Train 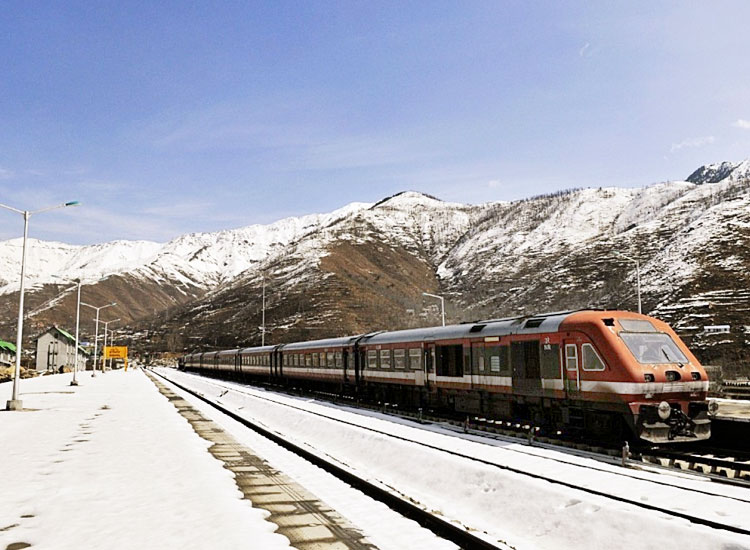 There is no rail network in Ladakh or even much in the Himachal Pradesh, so getting to Leh by train is impossible. Those who have the time and desire to venture on a different route might think to reach Shimla (capital of Himachal Pradesh), by train and continue north passing through Kaza and crossing the Spiti valley by bus to Keylong. The route is really beautiful and served by public buses, but considered at least a week of travel. Always hoping that the Spiti Valley is passable and there are no problems on the Kunzum La Pass, which happens to close for the bad conditions of the road.

The same can be said for Jammu, the capital of Kashmir, which can be reached by train and from there you can continue by bus via Srinagar and then continue to Leh. However, if you intend to reach Ladakh and the time available is not much I advise against these two options.

How to reach Ladakh by Motorcycles 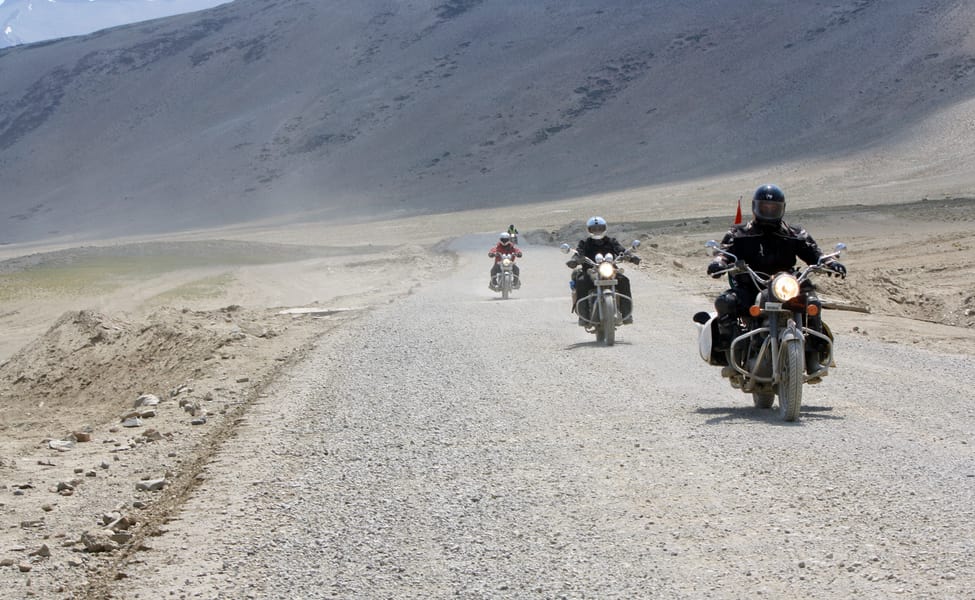 A fun alternative to reach Ladakh may be to rent a motorbike in Delhi or Manali and build a tailor-made trip without having to depend on public transport and being able to move completely independently. Surely traveling the Manali-Leh Highway in motion is an experience that alone is worth the whole trip and once you arrive in Leh. You can then explore much of Ladakh as you prefer. Consider that unless you want to drive twenty hours in a row, it takes two or better three days to reach Leh from Manali and two more days to return to Leh.

In my opinion, the best alternative is to rent a motorbike in Manali for 15 days, continue north to Leh. Enjoy Ladakh and go back, perhaps making a jump in the Spiti valley.

The rental bikes are all Royal Enfield and the cost for a 500cc displacement vehicle. I do not recommend the 350, even if it costs something less. Especially if you are two) costs from 1300 to 1500 per day, but for longer periods you can get some discount. Gasoline costs around 90 cents a liter and Enfield travels around 25km / L. The price is not indifferent, and only to rent bikes for 15 days you spend more than 250 dollars s. If the alternative is the Delhi-Leh flight and at least 150 dollars per round trip, and maybe you’re also two, the motorcycles can even be a cheaper alternative. 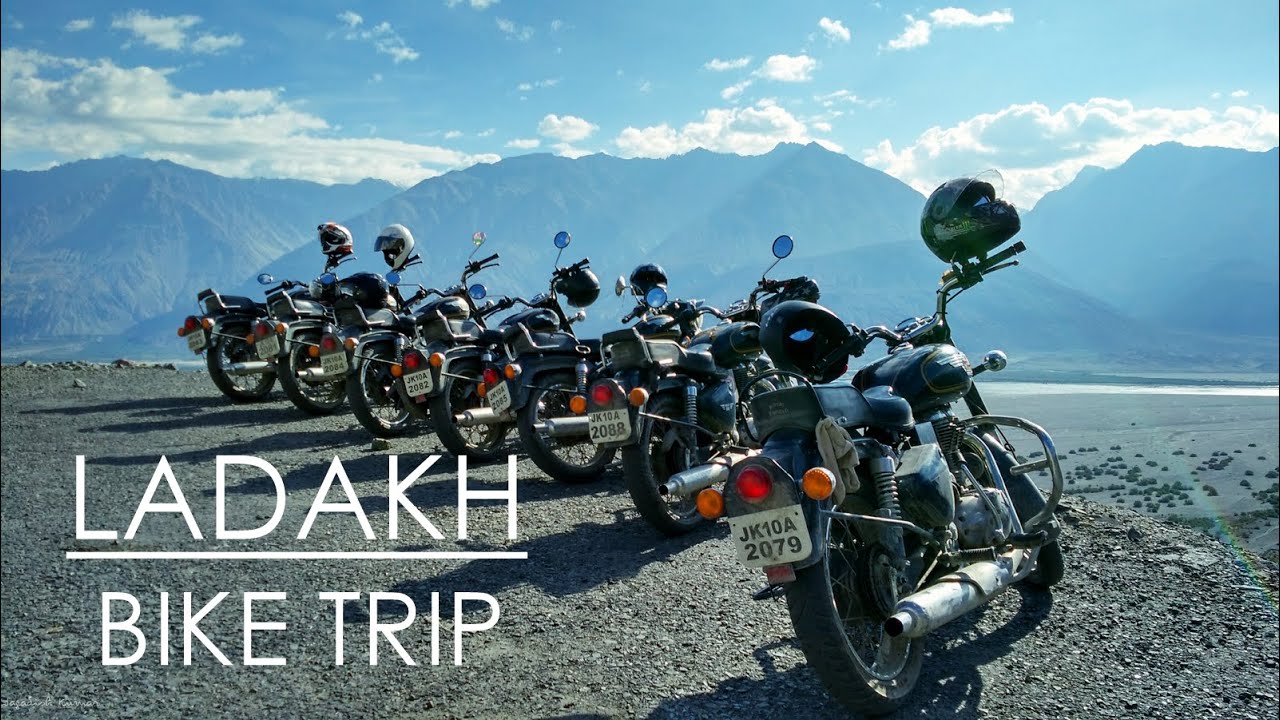 Why not! Starting from Manali by bike and getting to Leh could be an incredible experience. There are those who make the journey in six or seven days, but it is better to consider at least eight or nine. Consider that they are more than 400 kilometers of the road at an average altitude of more than 4000m and with different steps to be overcome between 4000 and 5000m.

In theory, you should not need a tent. You will find hospitality in the camps at the side of the road: shacks that act as a motorway grill where you can find food and a bed. Attention, do not underestimate the journey because it requires a great physical preparation! Hopefully, you have chosen your option how to reach Ladakh.