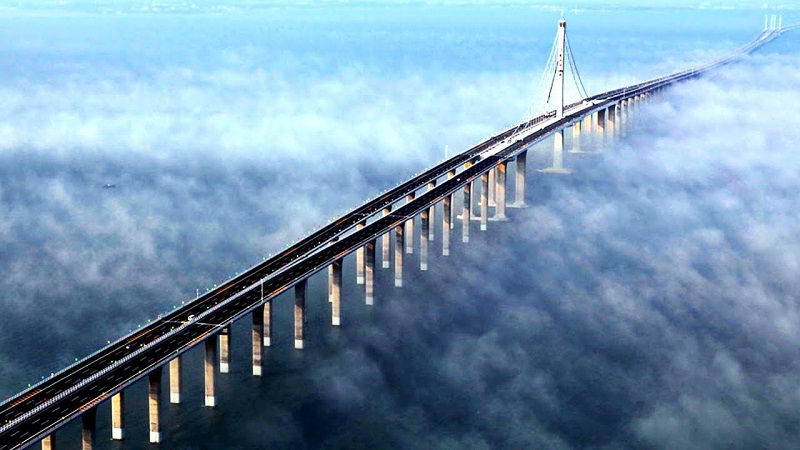 There are bridges that only an adventurous, adrenaline-loving soul would dare to cross because they represent a high risk, they are at great heights and their design is chilling.

Around the world, we can find large, long, and tall structures made of cement, steel, glass, and cable, some of them stretch for miles over lakes, ravines, and mountains. While it is difficult to tell if a bridge is dangerous just by looking at it, it is truly scary to cross some bridges regardless of their stability.

These are the 10 scariest bridges in the world, noted for their heights and steep slopes that seem to defy the logic of engineering:

The Geumgang is a suspension bridge 300 meters above sea level and spans about 40 meters, connecting two mountains. The bridge swings as visitors pass over it, which makes crossing it really challenging and if the wind is strong, the bridge swings much more strongly.

The bridge located in Zhangjiajie, China, over the Wulingyuan region is the longest and tallest glass-bottom bridge in the world. It measures 430 meters in total length and 6 meters in width and is suspended 260 meters above the ground. The Grand Canyon Glass Bridge is incredibly beautiful and paralyzing.

The spectacular 300-meter high glass walkway is located in the Zhangjiajie National Forest Park in southern China. Nicknamed the Coiling Dragon Cliff, this glass overpass features a terrifying plummet that offers a unique opportunity to take great photos of the spectacular landscapes of Zhangjiajie.

Suspended 30 meters in the air above the rocks, the beach and the water of this bridge are so fearsome that some who cross it to see the beautiful island on the other side refuse to return by the bridge. Instead, they opt for a ferry.

The Langkawi Bridge, Malaysia, Suspended at 700 meters above sea level, spans 125 meters across a spectacular chasm. Unlike straight bridges, the bridge has been curved to offer different perspectives on land and sea.

It was named on the US National Register of Historic Places This bridge spans 290 m high over the Arkansas River. And is still the tallest bridge in North America.

4. Bridge of the Aiguille du Midi in the French Alps

The Aiguille du Midi bridge is above sea level and from the top visitors can see the interior of Switzerland, France, and Italy. La Aiguille du Midi is located in the Mont Blanc Massif, the highest mountain in the Aiguilles de Chamonix.

The Titlis Cliff Walk is a pedestrian bridge along the cliff of Mount Titlis in the Swiss Alps. It is built about 3,000 meters above sea level and is said to be the highest suspension bridge in Europe.

The Hussaini Suspension Bridge is considered the most dangerous bridge in the world and spans the Hunza River in northern Pakistan. It is one of the most spectacular areas on the planet. Known because there are the mythical mountain ranges of the Himalayas and the Karakoram.

The 1,222-meter-long suspension bridge for vehicular traffic that crosses the Sidu River valley, looks scary but supports 43 million tons. Construction workers are said to have had to use a rocket to build the suspension cable