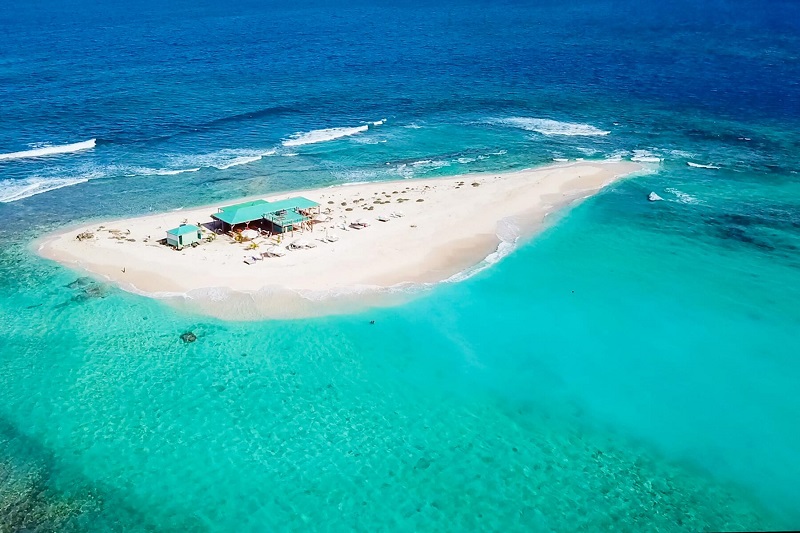 To see if it looks like a deep-sea fishing boat, one of those that are rented for a trip. Instead, it is the scheduled ferry that takes you to Anguilla. Sail through a cobalt blue sea that swells in large soft waves. He arrives in a bay with water so crystalline that it seems to be suspended above the seabed and docks in front of an orange and turquoise wooden house surrounded by a freshly painted white fence. The sign says: ” Welcome to Anguilla”.

It is the customs office on this island of the Lesser Antilles, the northernmost of the Leeward Islands. The ferry is the only means that connects it to nearby Sint Maarten Dutch territory in the Caribbean, much more touristy.

No cruise ships here. A mini-airport in the capital, The Valley, for small private planes only. A name – Anguilla – perhaps given by an Italian cartographer following the conquistadors, due to its sinuous shape. Not extremely original, because the Arawak Indians already thought about it 3500 years ago to call it ” Malliouhan a”, which roughly means “sea snake in the shape of an arrow”, therefore eel.

Instead, it seems that Christopher Columbus, who touched so many coasts, was missing this one because it was so flat that it could not be seen from the sea.

Long forgotten, the British occupied it in 1650, but the arid climate and soil made it an unprofitable colony, so much so that it was abandoned in the 19th century. With the whites gone, the population turned to fish and subsistence agriculture. Entering a federated state of former colonies with Saint Kitts and Nevis, it was so little considered in the local House of Assembly, that the Anguillans, usually mild-mannered, rebelled on May 30, 1967 (today celebrated as Anguilla Day ). As a result of this – a more unique than rare case – Anguilla returned to a British overseas possession and today these smiling people of African and Creole origin, great-grandsons of the slaves of the first domination, drive on the left and celebrate the birthday of Her Majesty Queen Elizabeth II. You discover all this at the Heritage Museum, in the East End, arriving along the ridge of only 25 km that the island for its length. The Amerindian past, on the other hand, relives in the caves of The Fountaine and Big Springs that let the Sun and the Moon enter, giving rise – according to the inhabitants – to the birth of the Universe. At The Fountain in particular the petroglyphs, the ritual objects, the stalagmite carved in the image of the God Jocahu, the three-edged stone-spirits of fertility called Zemis, make this place the best-preserved ceremonial site in the Caribbean (waiting to be included in the list of UNESCO World Heritage Sites ).

In recent times, the revenge on a somewhat dark past. Thanks to the “national treasure”: 33 perfect bays and beaches. That is the Caribbean as you dream of them: crystalline water that fades from intense blue to turquoise to white on the shore, to blend with the shade of sand so white that it dazzles and the consistency of powder. A paradise for a few happy few, who have perhaps been coming for decades, pass the word among themselves, return to the same resort (when they have no home). As happens in Meads Bay “crowded” with bathers – one here, the other at 200 meters – who float in the warm water, hat on, a drink in hand, chatting amiably while a school of blackfish crowds around their feet doing a scrub natural. Many of them are regulars of Carimar, a pretty little village among the flowers overlooking the bay, run with affable sympathy by a Swiss now the Caribbean. Around the white crescent of the bay goes up rocky on one side. On this garment, an address where you can discover the cuisine of Anguillan families is Sarjay’s, by the young Darren Connor, who in 2014 won as “Best Chef of Caribbean”. Like mahi-mahi ( mahi-mahi ) to eat in tacos with coleslaw and mayonnaise, but above all like Anguillana goat stew with rice and legumes and Creole snapper, with cabbage and coconut sweet potatoes, according to your grandmother’s recipe Mary. Finally, sipping the Calypso Cafe, with white rum, bitter cocoa cream, amaretto, whipped cream.

Maybe after a good night of dancing and rum-based cocktails, the best way to work it all off is to lie down on the shoreline of Upper Shohal Bay,a dazzling vision in the morning light, for many experts one of the most beautiful beaches in the world. With protected areas of palm trees and tropical vegetation dotted with the red of the flamboyants, a sea that looks like a Pantone of blue and azure, a coral forest a few meters from the shore, it literally takes your breath away. Mask, snorkel, and fins are a must: among multicolored parrotfish, electric blue damselfish, big-winged rays, elegant anemones, and sea anemones, time will pass very quickly, and snorkeling will become a kind of drug that can no longer be done. less. In order not to waste too much time between the bed and the water and to see some of the most beautiful sunsets over the sea you can imagine, the best location is the Shoal Bay Village., with comfortable apartments directly on the beach.

Another unmissable underwater show is Little Bay; it can be reached with the Calvin boat from Crocus Bay in a few minutes: it is a very small beach surrounded by a vertical cliff where pelicans nest, with emerald green water and a phantasmagoric world under the surface.

The night in Anguilla is made to rest or romantically gaze at a sky so starry it appears to be from another galaxy. But those who love nightlife gather at Sandy Ground, the second center of the whole island, and a beach dotted with bars where you can hear live music, like at Johnno’s, perfect for jazz lovers: pantographs by John Coltrane, Miles Davis, Ella Fitzgerald and good music all night long. It may therefore happen that the evening here ends up dancing on the beach by torchlight together with the Anguillans, but, surprisingly, it can be started with gnocchi with gorgonzola, or with a parmigiana. He prepares them for the Dolce Vita (with a poster of Fellini’s film at the entrance) Christopher Bacchiega from Verona, 32 years old with the Caribbean dream, who for six years has been delighting famous palates such as those of Dan Brown, Justin Bieber, Dustin Hoffman, Robert Downey Junior, Paul McCartney, Magic Johnson and declaring that it “will never go back”.

Is Anguilla a paradise for the lucky few? Also, but not only. There is a local social fabric under the golden sheen of luxury resorts. A pop Eel of the locals, lively and fun. The beauty, compared to other destinations, is that you can experience an authentic and easy holiday. It happens along with the many chiringuitos of The Strip, the main street of The Valley; Being illustrated by the always available curator, Wallblake Plantation, the oldest house on the island (from 1787), the best-preserved cotton plantation in the Caribbean; dining in South Hill at Tasty, Dale Carty’s small place, which relies on grandmother’s wisdom for some recipes: mango chutney for grilled chicken, pineapple sauce for pork, banana, and rum sauce for the coconut-crusted parrotfish, served with rice n ‘peas (tiny eel peas); Above all, you can discover the 70s side of the Caribbean: there is not only Bob Marley, here the legend is his friend Bankie Banks, soul-reggae musician. He performs at Dune Preserve, his local staff in Rendezvous Bay, and lives in a wooden house on stilts next door. A celebrity who is easily found, often on the veranda, lying in a hammock.