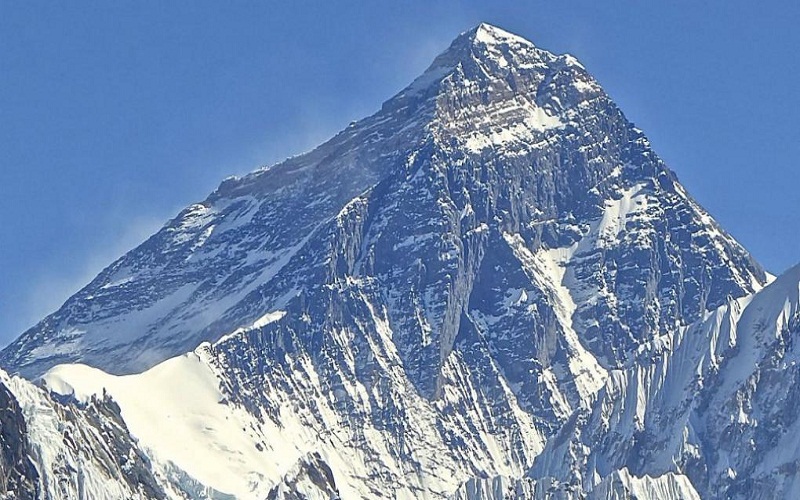 The 11 Most Famous Mountain in the World

The famous mountain have meant throughout history something very important in the relationship of the human being with nature. Many of the cultures that have existed and exist around the planet have turned some of these great mountains into important points in their way of seeing the world and feeling life. In many cultures, the “sacred mountain” is presented as the center and axis of the world. The mountain is also related as a symbol of stability and greatness, security, solitude, isolation and meditation when associated with the concept of strength.

That is why today we want to make a list of the 11 most famous mountain in the world and thus understand their meaning a little better.

This mountain is located in Mahalangur Himal, a sub-mountain range of the Himalayas, and marks the border between China and Nepal.

The mountainous Himalayan system is located in South Asia and passes through Pakistan, Bhutan, Tibet, India and Nepal.

Its summit is located in China or, rather, in the Autonomous Region of Tibet.

It is perhaps the most famous mountain in the world, because with a height of 8,848 meters above sea level, it is the highest in the entire planet and, without a doubt, the biggest challenge for lovers of mountaineering.

According to the data available, it is known that 287 people have died between 1924 and 2017, between Western mountaineers and Sherpas (generic name of the people living in western Nepal), who traditionally take care of transporting food, stores and supplies in the intermediate camps that are located above the base camp.

The main reason for these deaths are falls, snow avalanches, altitude sickness and freezing, and many of the bodies have not been rescued, remaining buried in the snow.

There are 18 official climbing routes to reach the top of Mount Everest.

The easiest part of climbing (to say it in some way) is the one that gives Nepal, being the most beautiful view that is contemplated from this side.

Charlie tells us that it is officially considered one of the most polluted mountains on the planet, due to the number of tourists who visit it and the waste they leave in its vicinity and the almost null infrastructures that exist 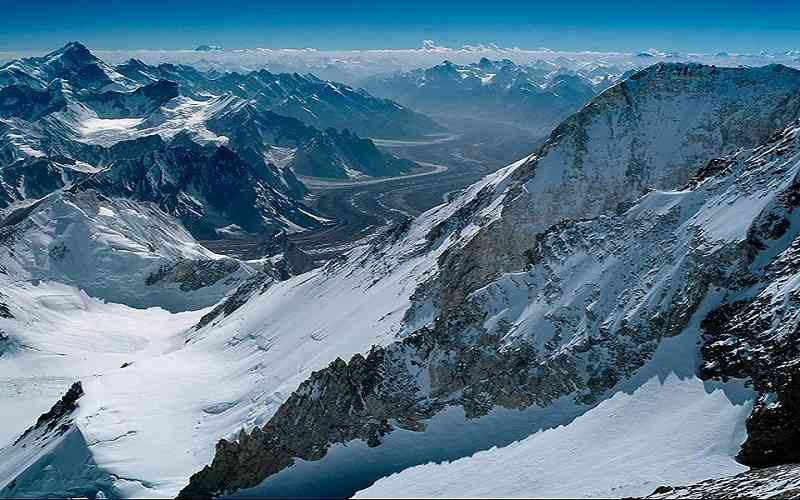 Another mountain belonging to a sub-mountain range of the Himalayas, this time to the Karakorum , which is located between the border of Pakistan and China.

With 8,611 meters it is the second highest mountain in the world and it has earned the nickname of “wild mountain” , because it is famous for how difficult it is to ascend it.

The most difficult mountain to climb.

It is the most beautiful and difficult eighty . A ruthless peak. Almost 300 climbers reached their peak.

For the great climbers, this mountain not only seduces you for its beauty, but forces you to face your fears.

The K2 is a perfect pyramid and the mountain rises only about 3000 meters above the glacial valleys that are at its base.

It is part of an elevated area that includes the Karakorum, the Tibetan plateau and the Himalayas (whose roof is Everest).

As a curiosity we can say that you can trace a path that joins the two highest peaks of the planet without descending from the 4600 meters. 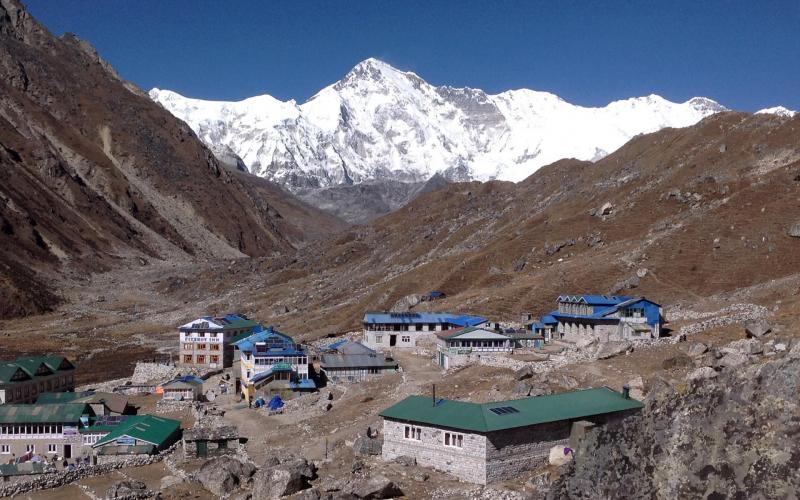 It is one of the most famous mountains, both because it has many difficulties for the ascent and its shape, because it has steep edges and its highest part has a pyramidal aspect , attracting a lot of attention.

Its name comes from Sanskrit and means  Black Mountain .

It is the fifth highest peak on Earth, with a height of 8,463 meters and is the demarcation point of the border between southern Nepal and northern Tibet.

Malaku is also found in the Himalayas, in the area called Mahalangur.

Its famous west side is one of the most complex and difficult routes of the world mountaineering. 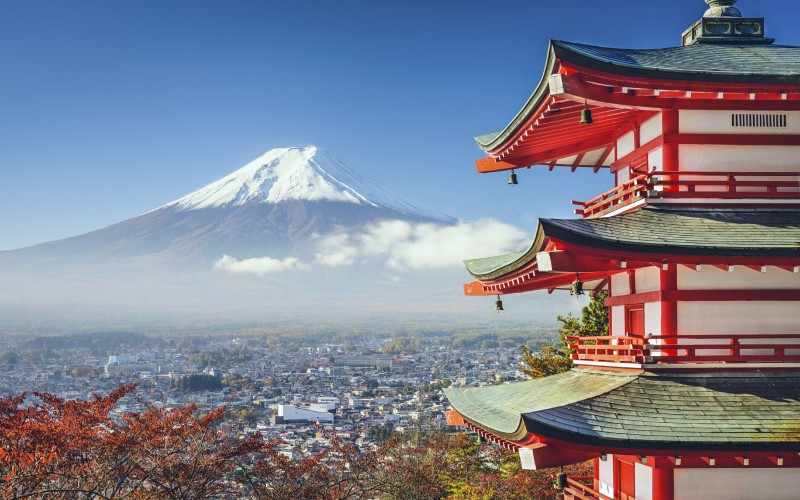 One of the biggest tourist destinations in all of Japan , besides being its national symbol.

Mount Fuji is considered an active volcano, but with little risk of eruption . The last registered eruption dates from 1707.

It is the highest peak in this country and is located west of its capital, Tokyo with 3,776 meters .

Mount Fuji is a composite volcano that has been considered since ancient times as a sacred area.

Charlie tells us that compound volcanoes are the most majestic, they are tall, symmetrical and with steep slopes, unlike the shield volcanoes , which are wide and flat. 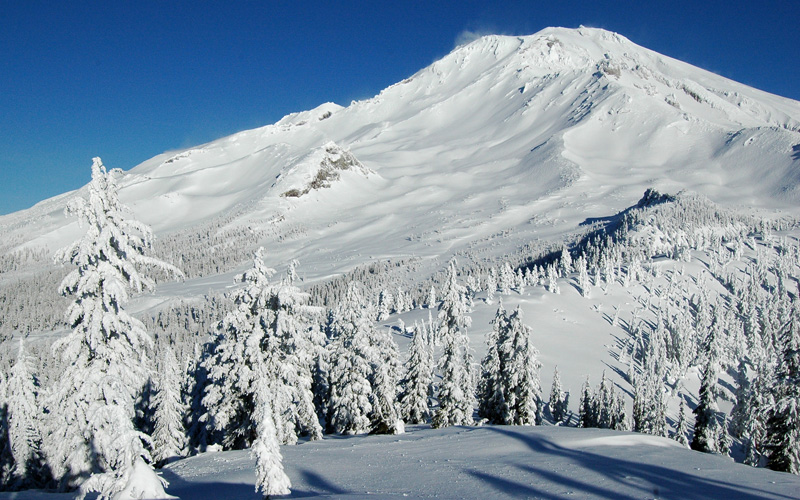 This is a mountain of great majesty and with 4,322 meters it is the highest volcanic peak in North America (the last eruption occurred in 1786) .

Mount Shasta is located at the northern end of the Sierra Nevada mountain range, located in the state of California, United States.

This mountain has been a ceremonial place for different Native American cultures and is very famous for being the center of diverse legends and a place where supposedly paranormal phenomena have been deployed, like the presence of UFOs and mysterious disappearances.

The Mount Shasta has been identified by many experts in the spiritual as  a cosmic power point.

Considered one of the 7 sacred mountains in the world , a Buddhist monastery was built in 1971.

Charlie tells us that a large forest fire , which occurred in 1931 , was stopped by a mysterious fog that emerged suddenly and left a very clear circle separating the center of the mountain in a circular way.

One of the legends tells us that the Hopi Indians , one of the few groups that today maintain their ancestral culture and who live in villages with more than 1000 years old, maintain that there are a lot of caves connected to each other under this mountain. even a city, where reptilian creatures live. 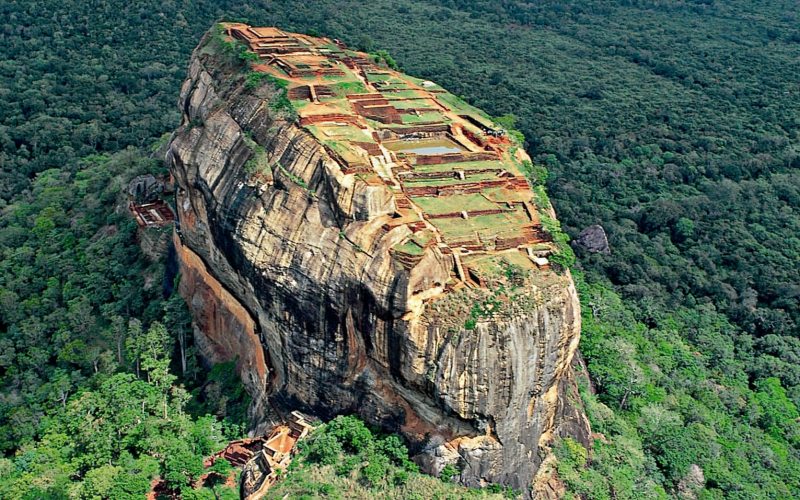 Ol Doinyo Lengai, known by the Masai people as “The Mountain of God” , is a famous volcano located in the Great Rift Valley, in northwestern Tanzania .

It has a height of 2,960 meters and a very particular shape, because its top is composed of two craters : one located to the south, which is inactive, and one to the north that has presented eruptions in recent decades.

It is the only volcano that has released ash and lava whose composition of carbonates is unique, with a viscosity very similar to that of water. Its lava is the most fluid in the world and also the coldest , only 590ºC.

This lava is intense red at night and black during the day , turning white on contact with water . 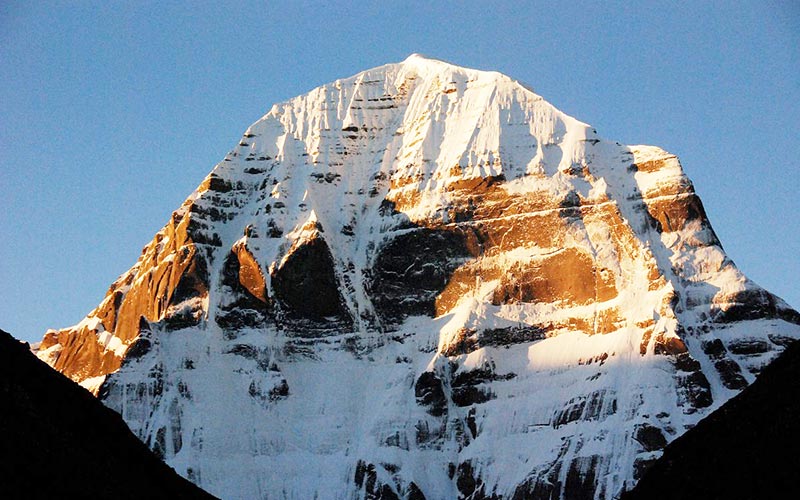 Also located in the Himalayas, specifically in the Gangdisê chain, between Tibet and China.

It is a mountain very famous for its great significance within the Buddhist and Hindu worldviews ; in fact, it is the only mountain of the most important in the world that is not a destination for excursions, because it respects the meaning it has for these two religions. No attempt at climbing is known.

It has a height of 6,638 meters and it is home to three of the most important rivers of the Asian continent: the Indus , the Sutlej and the Brahmaputra .

Shiva , one of the three gods that make up the Hindu Trinity , is the god of destruction and resides on the summit of Mount Kailash , which is seen in some creeds of Hinduism as paradise and ultimate destination of souls. 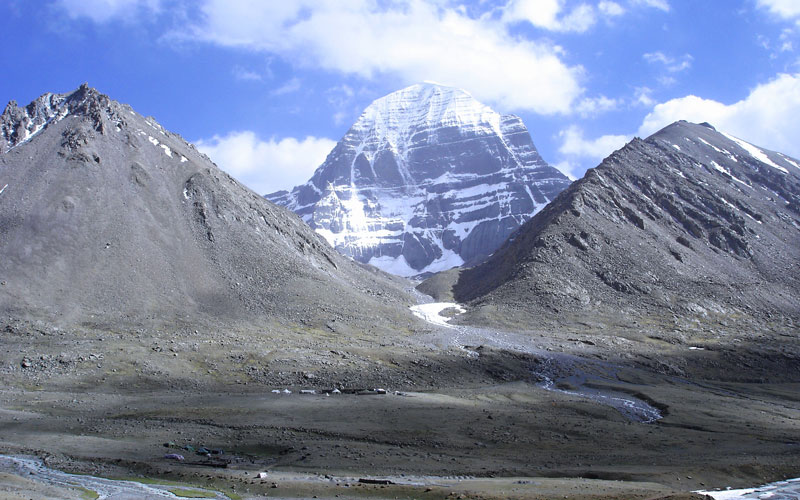 The other gods are Brahmá (the creator of the universe) and Vishnú (the one who preserves the universe and goodness).

For the Tantric branch of the Buddhists, they believe that Kailash is the home of Buddha Demchok, which represents the ultimate happiness.

Every year  thousands of people of different religions make a pilgrimage to this place , making a walking route around the mountain to attract good fortune.

The circuit to be covered is 52 km and according to tradition it must be done in a single day. We already know that the top can not be stepped on, so you have to turn it around.

Famous for being the highest mountain in Europe , with 5,642 meters in height.

It is a volcano that is located in the Caucasus mountain range , in Russia .

According to Greek mythology, this is the place to which Zeus chained the Titan Prometheus , as a punishment for stealing fire from the gods and giving it to human beings.

It is also considered as the largest ski mountain in the world, having one of the mythical descents with the highest slope in the world. 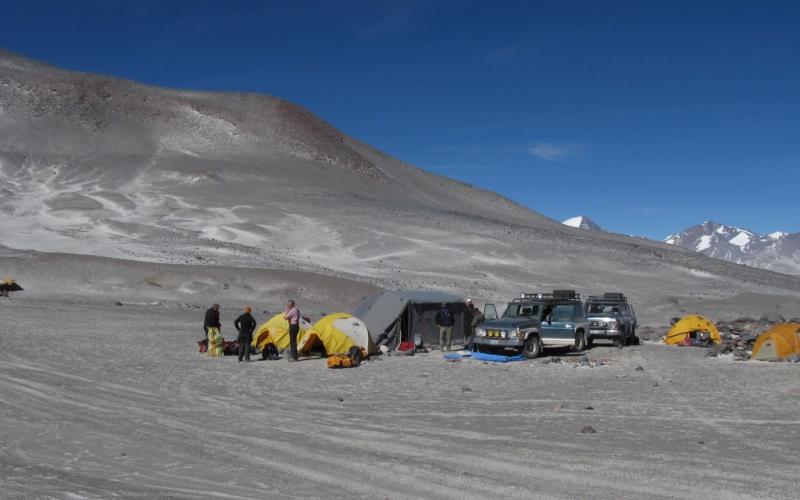 Belonging to the Andes mountain range , this mountain is located on the border between Chile and Argentina.

It is 6,891 meters high and is the highest volcano on the planet , in addition to the second highest mountain in the southern and western hemispheres.

It is famous for holding the world record for altitude in land vehicle because, to date, in this means of transport has been raised to 6,688 meters. 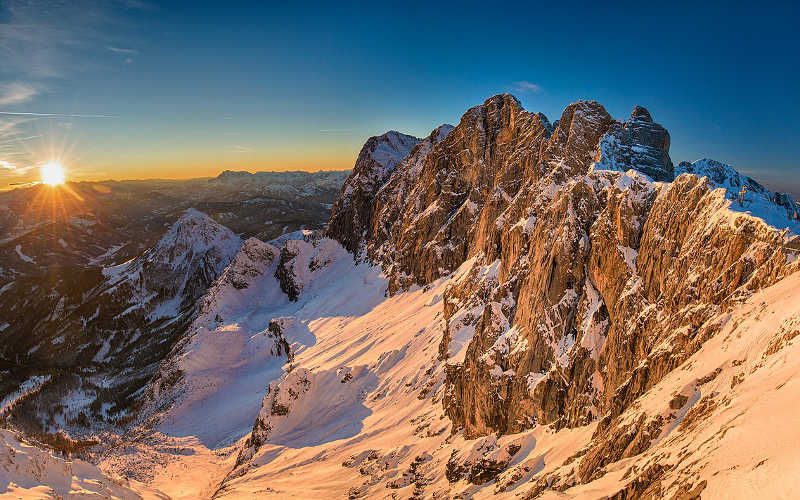 Also located in the Cordillera de Los Andes , this time in Argentine territory.

It is a mountain famous for being, with 6,960 meters , the highest point of the entire American continent and the southern and western hemispheres.

The Aymara Indians call it the Stone Sentinel and consider it one of the most treacherous and changing mountains on planet Earth .

Its summit , located a thousand meters above any other nearby, acts as a giant magnet against the anticyclonic winds of the Pacific, which manages to change the weather conditions in a short period of time.

In addition, expert mountaineers tell us that altitude sickness has devastating effects on this mountain, much higher than those of the Himalayas. 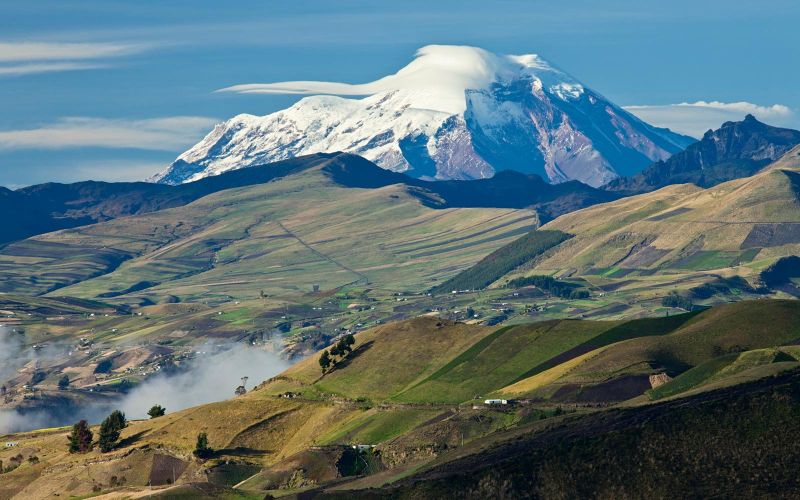 We finish this interesting tour of the 11 most famous mountains in the world with the Chimborazo Volcano, located in Ecuador and which has a height of 6,263 meters .

This mountain is famous for being the point of the planet closest to outer space .

Even though Everest is the highest mountain in the world, the Chimborazo Volcano is in a higher altitude zone, so it exceeds at least two kilometers anywhere in the Himalayas as the furthest point on the planet.

As a curiosity , there is a tradition of small communities near the volcano that carries the ice from the glaciers of the mountain to the town to make drinks, they are called “the chimborazo ice makers” , they transport them in mules and sell the ice blocks in cornets.

Finally,  the mountains are undoubtedly one of the wonders of the world that most arouse the attention of tourists. Do you know which are the most recognized for their height, history or magnificence throughout the globe? Of great height, sacred, epicenters of important events; the mountains are a very prominent part of our geography , let’s live where we live. We have learned about them in school and they fascinate us. Therefore, today we tell you which are the most famous mountain in the world.