Guide To The Best Street Art Of Paris

Paris is not only museums, palaces, narrow streets, romantic cafes, but also hundreds of thousands of graffiti that flooded the city. Street art appeared on the outskirts of Paris at the end of the twentieth century and gradually filled the whole city – huge murals are found at the ends of high-rise buildings on the outskirts and in the center, small graffiti decorate the facades of houses in the heart of the city for decades, hundreds of frescoes by unknown artists side by side with world best street art stars. In this abundance, it is easy to get confused, to get lost and not to see the main thing.

We will tell you about 9 places where you can see the best street art in Paris. 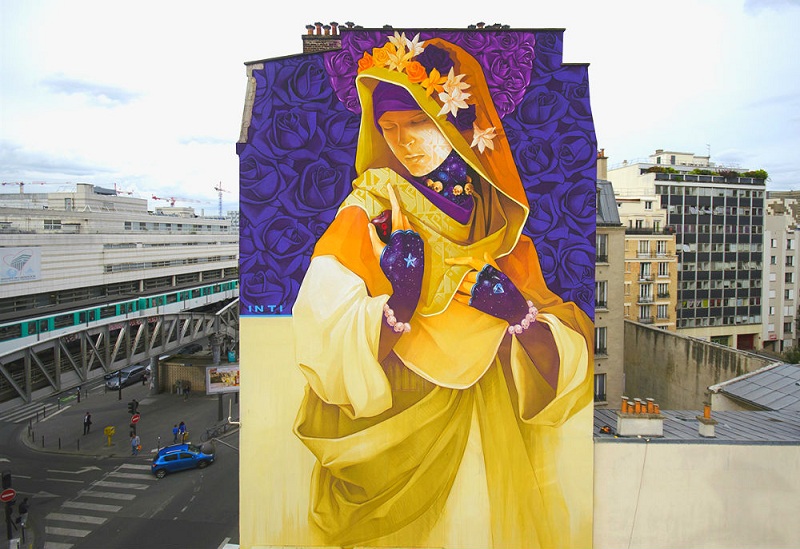 1. Frescoes of the Itinerancy Gallery (Itinerrance) in 13th District

Gallery Itinerans – one of the main galleries of street art in Paris. Since 2004, she has been promoting best street art, supporting young artists and collaborating with the best street artists from all over the world, who are invited to decorate huge areas in different parts of Paris with frescoes. The most famous project of the gallery is Street Art 13, during which in 2009 the gallery invited 25 artists from 13 countries to decorate the ends of high-rise buildings in 13 districts with huge murals. Among the participating artists in the project are Conor Harrington, D * Face, and Shepard Fairey. The result was 32 works that art critics have often called the “graffiti museum under the open sky” and one of the best graffiti in France.

Most of the frescoes are located next to Nationale Metro Station, on Vincent Auriol Avenue. Addresses of all 32 works, photographs, and a plan are on the site of the gallery. 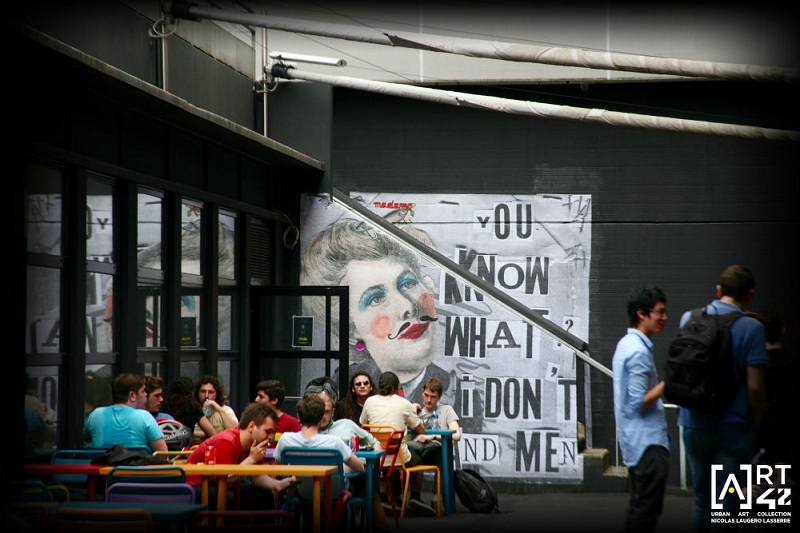 2. Museum of street art and post-graffiti Art 42 in the 17th district

Art 42 is the first street art museum in France, opened in the 17th arrondissement of Paris in 2016. The museum does not have its own premises; its collection is located in the halls, corridors and on the walls of the innovative school of informatics founded by billionaire Xavier Nehl. The museum’s exposition is based on works from the collection of the artist Nicolas Lasserra.

Museum address: 96 boulevards Bessières. It is free and open to the public on Tuesdays and Saturdays. Visitors are asked to select a visit time and register on the museum website in advance. 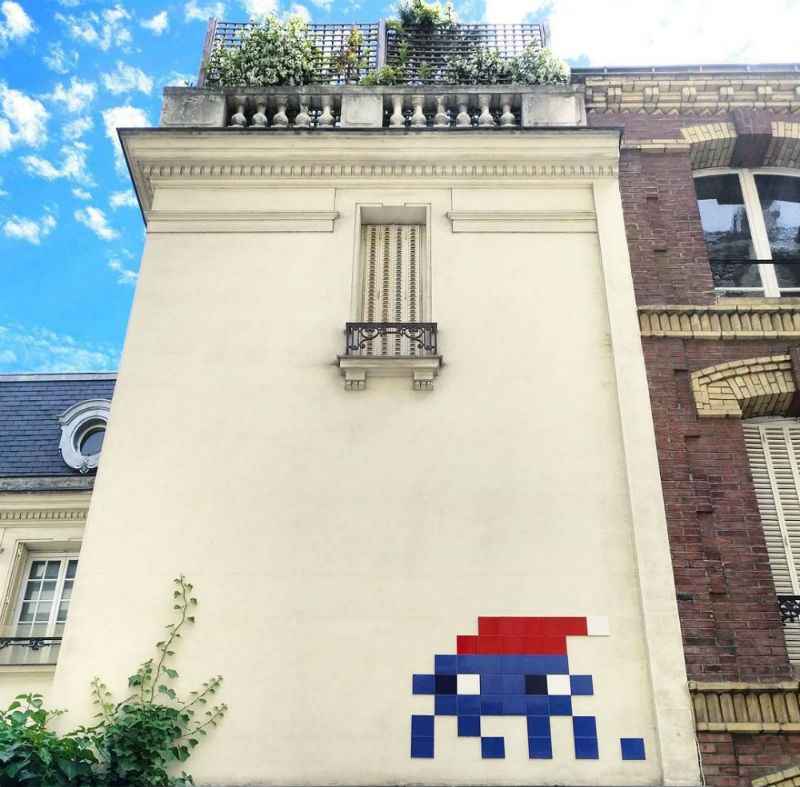 3. Hundreds of works Space Invader in all areas of Paris

Space Invader (Space Invader) – one of the most famous street artists of Europe and the world, its mosaic drawings dedicated to the game Space Invaders, is in many countries – from Tokyo to New York and Melbourne. Even on the international space station, there is a mosaic of it.

Homeland Invader – France, his work can be found in 32 cities, and most of them in Paris. The first Invader mosaics appeared in the city in 1996, and now there are already 1340. The mosaics are invaders and heroes of geek/pop culture: Mario, Pink Panther, Dr. House, Spiderman, Princess Leia, etc.

Most of the artist’s works are concentrated in the 11th district. And for those who want to find out the location and find all 1340 mosaics of the artist and participate in the quest, we recommend installing the Flash Invaders application. 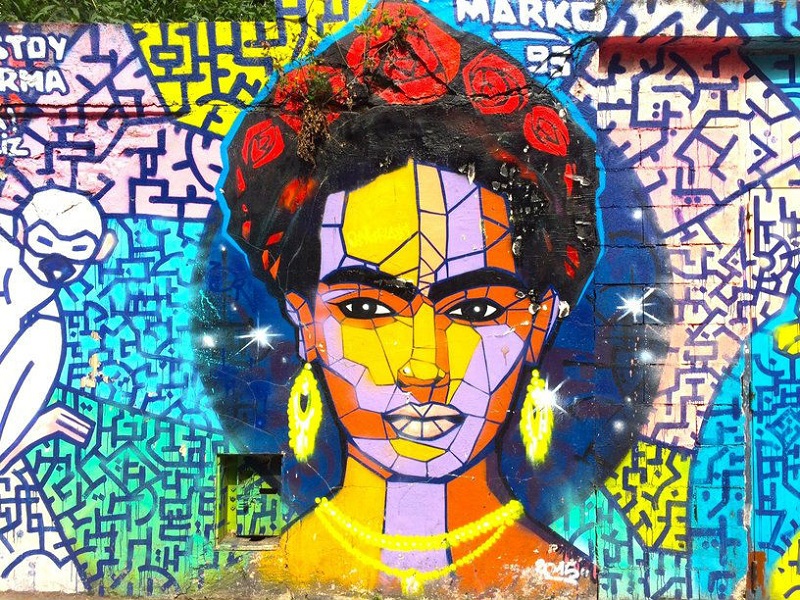 4. Project Street Art Avenue in the 19th district of Paris

Street Art Avenue is a project of the Paris City Hall dedicated to being held in the city of Euro 2016, under which 37 artists were allocated several thousand square meters of buildings, bridges, and walls on both banks of the Saint-Denis channel for graffiti stretching from Stade de France to La Villette. Una Vida Familia, Alexandra Arango, Rébus & Bastos, Marco 93, Guaté Mao participated in the creation of the frescoes. 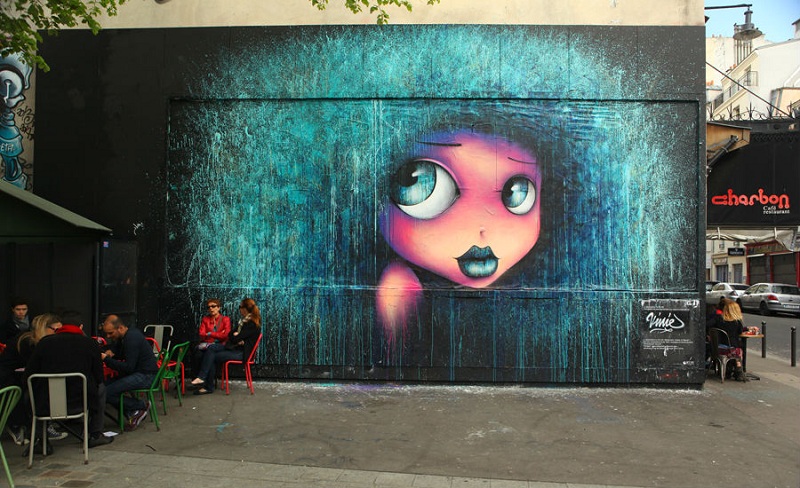 5. Oberkampf and Menilmontan (Oberkampf, Ménilmontant) – street art centers in the east of Paris

East of Paris – one of the cradles of French best street art. He is here everywhere – on bridges, roofs, and walls of houses. In addition to thousands of graffiti by unknown authors, there are real masterpieces: the graffiti of the associations Art Azoi and Le Mur

Le MUR calls their frescoes “ephemeral” and several times a year they propose to different artists in a studio and stick them on the wall 3 by 8 meters at 107 rue Oberkampf, which a month later will be plastered with works by other artists.

The Art Azoi Association owns 3 walls (Square Karcher, Pavillon Carré de Baudouin and on the corner of Rue de Bagnolet). Every few months they are given to paint to three different artists, who necessarily work in different styles. 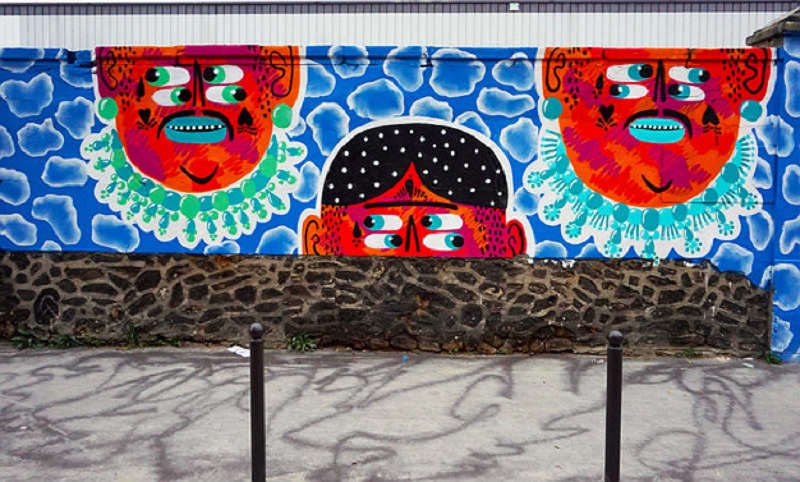 Rosa Parks Wall, 500 meters of which was painted by 5 artists from different countries – the largest best street art in Paris. The wall was built in 2015, when in this area of the city they opened a new metro station Rer E and gave it to the GFR team for painting, which invited artists (Kashink from Paris, Bastardilla from Bogota, Katjastroph from Berlin, Tatyana Fazlalizadeh from New York and Zepha from Toulouse) jointly paint the wall. Graffiti is made in a variety of styles, colors, and techniques. Also next to the wall of Rosa Parks, Riquet Bridge has an excellent gallery of street art Galerie à Ciel Ouvert R’style, where young French artists are exhibited. 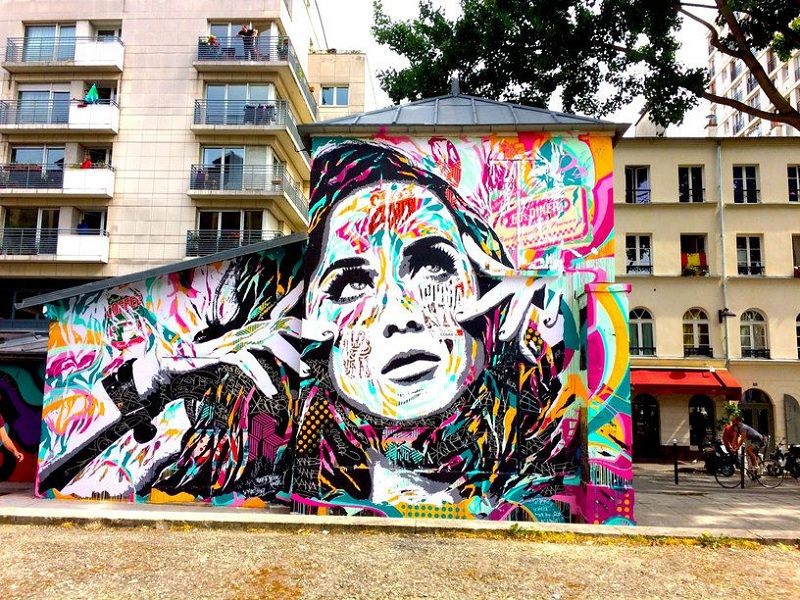 7. Street art on the banks of the Urqué Canal (canal de l’Ourcq) in the east of Paris

Urk Canal – one of the main centers of street art in Paris. The first graffiti appeared here more than 30 years ago since then thousands of frescoes were painted on the banks of the canal and bridges, boats and telephone booths. Residential and abandoned houses were painted from the foundation to the roof, and monumental murals appeared on the facades of the high-rise buildings.

Every few years, best street art festivals are held here, thanks to which more and more interesting graffiti appears on the banks of the channel. The street art zone begins near the Grand Marché Stalingrad market, lasts almost 10 kilometers and ends at the Aulnay-sous-Bois border of Paris. The most convenient way to consider is street art, walking on foot, cycling along the canal bank or sailing on a boat that goes along the canal in summer. If you do not have time to inspect the whole area of street art, then visit the streets Quai de Loire, rue Polemarch, Quai de Valmy and 1 rue de l’Ancien canal – there is the best graffiti.