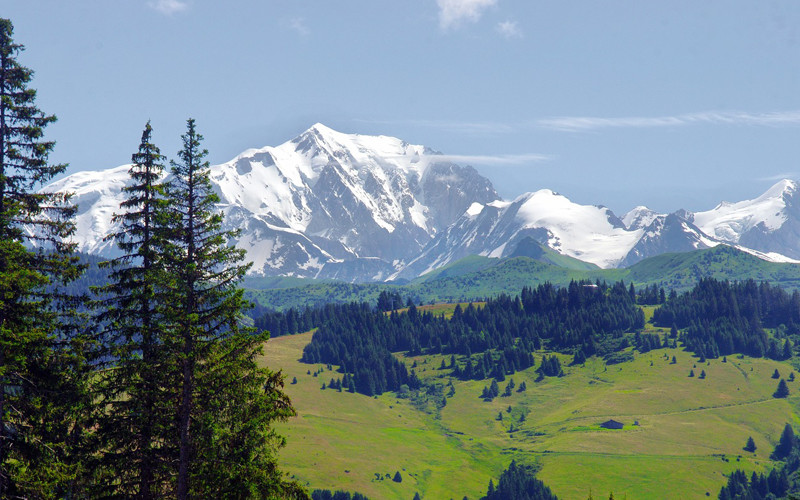 The highest mountain in Europe

Well, today we are going to concentrate on Mount Elbrus. Where it is, how it is, when it was formed, if it can be scaled, when and how. 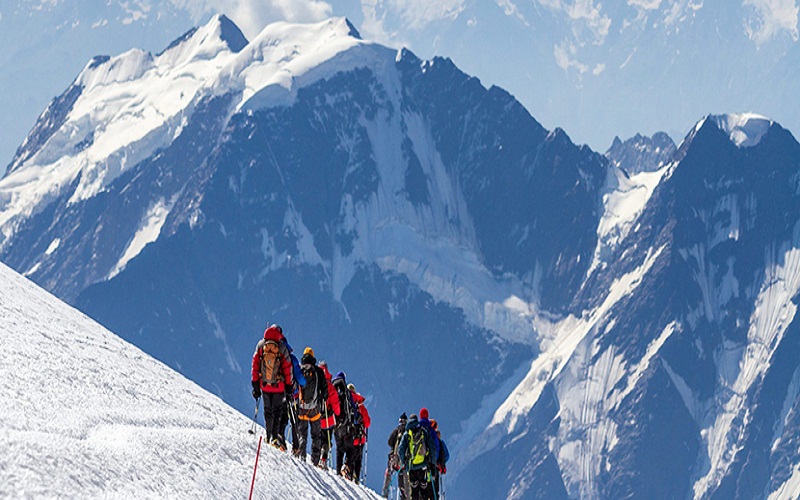 It is on the natural border between Europe and Asia, the Urlaes Mountains. In the European part of Russia, near the border with neighboring Georgia. The Urals are not great. They are not very high peaks but very soft that spread today between Russia and Kazakhstan, along 2,500 kilometers.

Elbrus is a mountain of volcanic origin and has two peaks , one higher than the other. The highest peak reaches 5,642 meters and the other peak is just lower with its 5,621 meters. The first is to the west and the second to the east and both were climbed for the first time in different years of the nineteenth century. The lowest by a Russian climber called Khachirov and the highest by a British group.

It is a highest mountain that is covered by a layer of ice and also has twenty-two glaciers. The area where the mountain marks the meeting between two tectonic plates. The Arabic and the Eurasian, so it is prone to earthquakes. The fault is difficult and complex and as it moves laterally there are almost no volcanoes. So that the Elbrus is of volcanic origin is quite a rarity.

According to the geologists, Mount Elbrus began to form ten million years ago with volcanic eruptions. Although the last major eruptions seem to have taken place 700 thousand years ago. Today what remains of all that chaotic activity are some weak fumaroles. And the stories of Greek mythology that relate how Zeus chained to Prometheus there to steal the fire of the gods to give it to man. 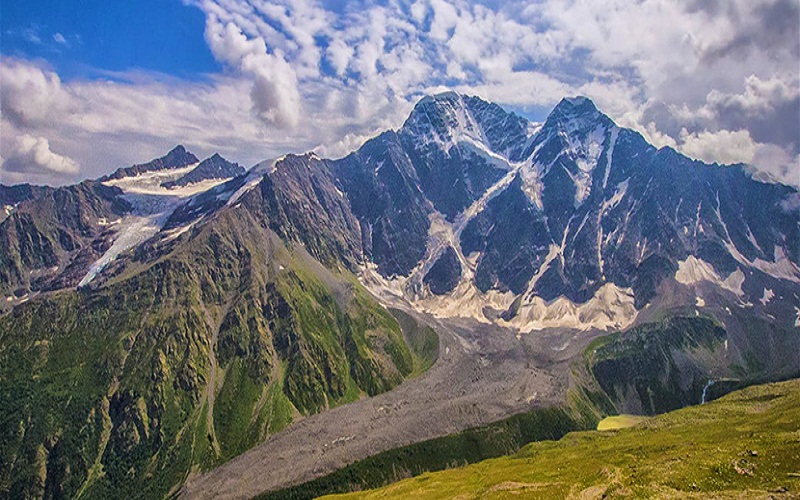 In the summer months of the northern hemisphere, where the highest mountain is located. The days are more benign to undertake an escalation. It is estimated that on average half of the days are sunny although it can be a windy site. When it exceeds four thousand meters, things change and become arctic. So you do not want to imagine what it is like in winter if it is like that in summer. Well, as today are the streets of Chicago, minus 50º C.

On the northern slope there are forests of pines, ash and birch and thorns of silver leaves. At the subalpine level there are wild flowers and pale pastures and rosebushes of the famous “rose of the Alps”. When the height can be considered alpine, between two and three thousand meters of altitude. There are more flowers and more grass. On the south side, on the other hand, there are fields of ash, beech and maples , mushrooms and berries. 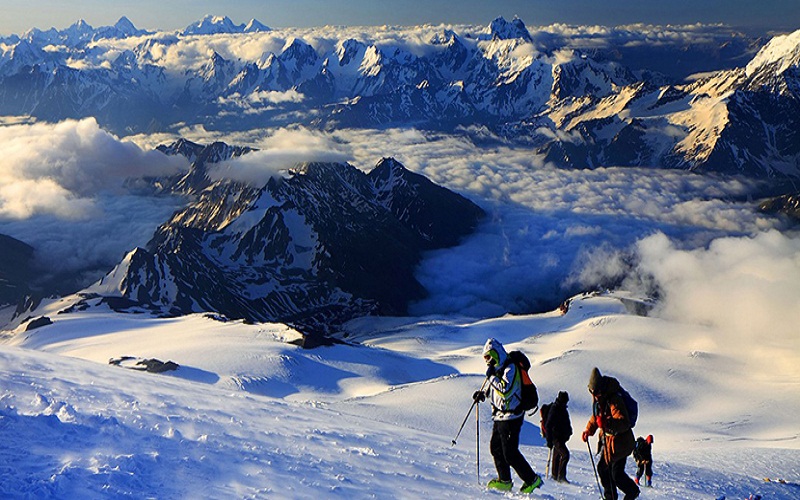 In principle you have to be interested in climbing. Because the vast majority of its visitors are climbers willing to achieve the same as the Russian and the group of British who reached their peaks in the nineteenth century.

The mountaineering and climbing started to become popular in the years of Soviet domination. Even in the mid-1950s a group of 400 men climbed the mountain to mark the 400th anniversary precisely of the annexation of the autonomous region of Kabardia Balkaria. Which is where the highest mountain is specifically located. Then, between the ’60s and the mid-’70s, cableways that reached 3,800 meters were built and several routes of ascent were drawn.

However, there is a main and most popular route that does not have cracks in glaciers and climbs quite straight on the side where the cable car is located. This is the route that is filled in summer and even then. There may be more than ten deaths per year among those who make the attempt. This is the safest and fastest route partly. Because of the cable car but also because of the chairlifts that operate from morning to past noon.

Following this route ensures you are back to take the last chairlift, and if everything goes well it is completed in about six to nine hours of climbing. Always thinking of the western summit. The descent takes less, but it can still take three to six hours. Actually, the times depend on the route chosen so yes. On the contrary, you choose the north route you will see less technical support equipment and you will have camp life, but at the same time you will see more landscape.

Today there are several agencies that offer to climb Mount Elbrus. One of them, for example, has a classic package of 14 days. Another that includes skiing, one of just eleven days and is something like espresso and one that also includes the ascent to Mount Kilimanjaro. For fans it is one of the famous Seven Summits of the world. The agencies in general follow the simplest southern route. And make between five and six climbs per season between May and August, the summer. 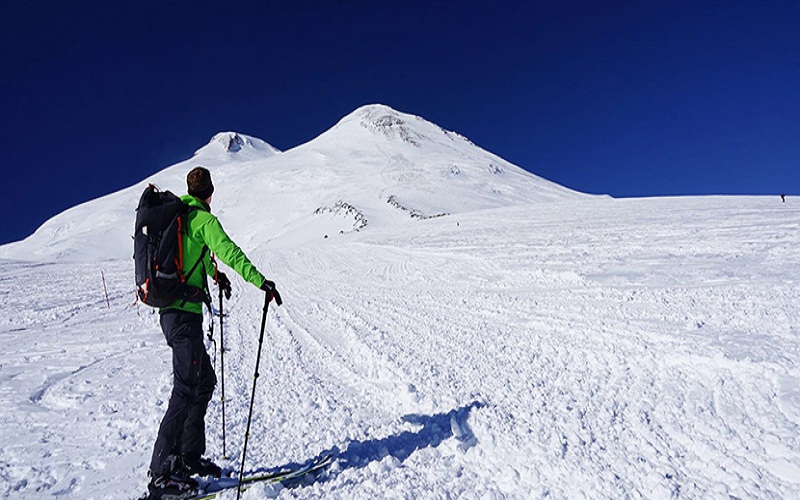 In general you arrive by plane to the nearest airport, which is the Mineralnye Vody, usually via Moscow. And from there you take a mini bus to the beautiful Baksan Valley in a journey of about four hours. There are hotels nearby and all the excursions include days of acclimatization with hiking in the surroundings.

The truth is that it must be a wonderful trip. Did you see the movie Everest? Well, something similar. If you’re interested in researching a little more websites such as Adventure Alternative. Or highest Mountain Madness offer trips to Elbrus and its wonders.