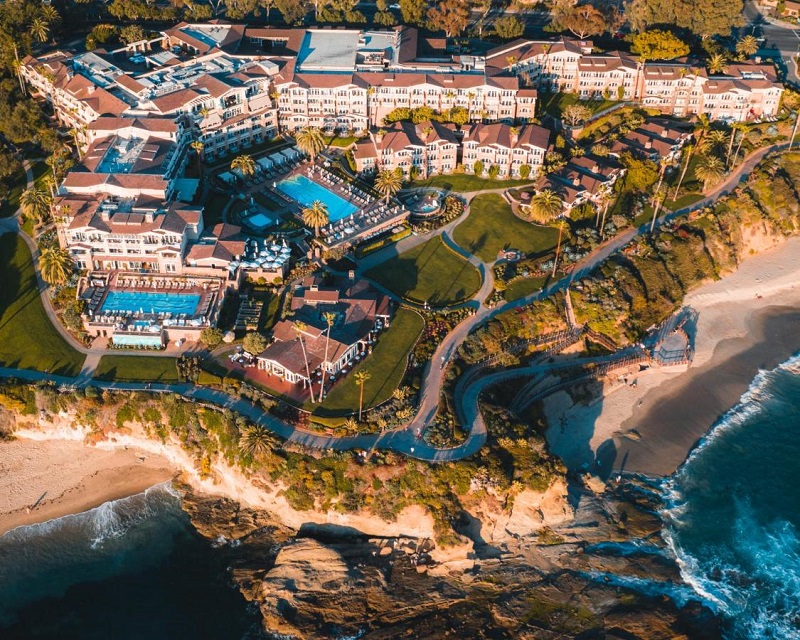 And we are still in sunny California! We are driving from Los Angeles to San Diego and we are finally in Orange County, in Laguna Beach, a seaside resort of about 24,000 inhabitants blessed by luck for its position on the Pacific Ocean that gives it a mild climate and a spectacular profile. hills dotted with rock formations, beautiful beaches, and parks.

The city attracts visitors from all over the world, like us, and it is precisely from its coastal strip of almost 15 kilometers that we want to start discovering it. Sea, coast, and beaches are the flagships of Laguna Beach that make it one of the favorite Californian destinations, to put it in local terms: a top destination (it “sounds” very good). But when you arrive in the city, much more has a pleasant involving effect, starting with the warm hospitality.

Laguna Beach California Crystal Cove State ParkWe starts from the north where the beach is at Crystal Cove State Park (8471 N. Coast Hwy.) Is a long, narrow strip of about five kilometers sheltered by a rocky outcrop where peace, just what we are looking at right now. We too agree with the statement that this is one of the most beautiful beaches in Southern California with the added bonus of its coral reefs, rock pools, and beautiful corners, not to mention the immense woodland behind it.

In this area, near Trancos Creek, there is also a Historic District that has 46 cottages dating back to the 1930s and 1940s which are given a new life according to a public use refurbishment plan. The beach is open from 6 in the morning until sunset while the historic district is open until 10 in the evening. It is advisable to visit this coast at low tide to appreciate it to the fullest.

Crescent Bay Beach Laguna BeachIn North Laguna Beach, Crescent Bay Beach (Cliff Dr. & Barranca St.) is a large and popular sandy beach, with a few rocky spots. You can go snorkeling, body-boarding, body-surfing, and whale watching in April and May, an indelible spectacle and emotion! The shoreline has benches, toilets, showers, and a lifeguard service. West of the beach, Crescent Bay Point Park (271 Crescent Bay Dr.) is a small grassy park on a bluff overlooking the ocean, coastline, and bay. The whole thing is really a “nice little place”.

Shaws Cove Laguna beach shows Cove can be reached directly from the steps on Fairview Street and measures approximately 200 meters in length. It is a somewhat secluded beach (that’s why we like it), surrounded by rocks on which some houses stand. The main activities here are swimming, boogie-boarding, and scuba diving especially on the western side (so they say). Beautiful photographs are taken of the waves breaking on the shore. It is forbidden to collect rocks, shells, or any type of marine life.

Main Beach Park Laguna BeachThe city center is home to a “green jewel”, Main Beach Park (Broadway St. & Pacific Coast Hwy.), A very popular but not chaotic park. There is a relaxing walkway along which you can take walks and turn your gaze to Main Beach, the popular beach of the same name which is a direct continuation of it and where many sports activities are practiced. This is the largest beach in Laguna Beach at the stretch where Broadway and Ocean Avenue intersect the Pacific Coast Highway.

One of its standout features is the white lifeguard tower placed in the middle of the sand strip which becomes a bit rocky at the north end. Main Beach is always crowded due to its proximity to shopping areas and restaurants, there are public toilets and showers, benches, picnic tables, games for children, a volleyball and basketball court. It is a beautiful coast for everyone, especially for families and young people but also for those who practice swimming, bodyboarding, snorkeling, kayaking, and body-surfing. The surfit is not allowed in the summer months due to strong currents and waves. It is certainly not the ideal place for those looking for a secluded corner in direct contact with nature but it is still worth seeing.

Victoria Beach Laguna BeachThe shoreline from Main Beach to Pearl Street Beach is a continuous strip of sand. Since there are stairways leading down from the side streets of the main artery, the municipality has given 12 different names to the beach segments. This beautiful walk is also worthwhile because you can return to the pavements of the Pacific Coast Highway whenever you want. Victoria Beach (2713 Victoria Dr.) is anything but a classic beach and it is precisely this feature that distinguishes it and makes it a fascinating place. It can be reached via the steps next to Victoria Drive.

On the beach is the Victoria Tower, an enigmatic tower that looks like something out of a story and which is known as the “pirate tower”. In reality, it was just the staircase belonging to a family who owned the house on top of the cliff. Built in 1926, the 20-meter tower rose up to the house with internal access to the building that allowed the owners to access the beach. Just for the record, there appears to be a design flaw that made the ladder inaccessible at high tide. However, the tower remains something enchanting that lends itself to the free will of the imagination. Near it there is a pool with sand and saltwater that fills with the ocean waves. On this beach, without services, you can play volleyball, dobodysurfing, and scuba-diving. In our opinion, it should definitely be visited.

Aliso Beach Park Laguna BeachA wide and popular, family-friendly sandy beach is Aliso Beach Park (31131 Coast Hwy) in South Laguna Beach. There is also a convenient parking lot along Highway 1. Here people walk their dogs on leashes, children find lots of games, there are restaurants, showers, and toilets. You need to be very careful of surfers in the water when deciding to swim.

Table Rock Beach Laguna BeachAt Table Rock Beach (31681 Sea Bluff Ln.) The rocks are the protagonists both because they delimit the beach, which always creates a certain charm, and because there are some everywhere in the bay, even in the water. A long row of wooden steps leads to the sandy beach but the staircase does not start from Highway 1 so it is not very easy to find, however, we asked for information on the spot along with the Table Rock Drive and from there they indicated the access to Bluff Drive.

It is pleasant to snorkel and when you look up you can see the seagulls circling against the background of the blue sky and the houses above the rocks that embrace the cove. The beach has no services. In the center of the coast, there are boulders of various shapes and sizes. In this small cave, there is a rock arch and at low tide, it is possible to cross it to Totuava Beach, a beach that can be reached more easily from Thousand Steps Beach. On the south side of Table Rock Beach, many people climb rocks to access another hidden sandy shoreline. In a nutshell, this segment deserves to be scrutinized in all its corners as much as possible, according to one’s abilities and paying close attention.

A thousand Steps Beach1000 Steps Beach (Thousand Steps Beach, 9th Ave.) is one of the largest beaches in South Laguna Beach with amenities and also a volleyball area. The name might scare you, in reality, the steps are “only” just over 220 for which it is worth walking, because then you get to its pools and caves where you want to venture, for example, the one in the south end where you it can enter at low tide, go through the tunnel and emerge in a small rocky cove on the other side.

Also in the north end of Thousand Steps Beach, there is a cave that you can always go into at low tide to get to a great beach to see, Total. All of this means that the 1000 Steps area is a remarkable natural environment. And here too, of course, maximum caution.

On the Mussel Coast, we mention Three Arch Bay Beach even though it is located in the private community of Three Arch Bay in South Laguna Beach. Unfortunately, there is no official access to the beach from the adjacent coasts but, if you can ask for permission on-site to go through one of the three stairways that go down to the beach, you can see three small natural arches at the north end of the bay that gives the name of this delightful corner. Near the rock where the arches are carved, there is another small sandy bay. There are strong currents at Mussel Cove and there are no lifeguards, so swimming is best avoided.