The 4 most beautiful villages in France

Throughout the country, we can find magnificent cities, but there are towns in France that can compete in beauty and attractions with their older sisters. They are towns full of attractiveness, which fascinate and attract a certain tourist who wants to carry out a rural type trip.

Nature, history, tradition, and rich cuisine are some of the experiences that these beautiful towns in France offer travelers. To make a getaway to them is to discover different and peculiar landscapes, exceptional corners through which time has not passed, and original alleys.

They are different places, full of charm, peace, and tranquility. In short, towns that when they meet are impossible to forget.

Towns of France with a medieval atmosphere

Located in the Midi-Pyreness region, it is one of the best-known and most-visited towns in France for its charming medieval appearance.  Being located on top of a mountain, it was given the affectionate name “above the sky”.

Once there we will verify that it lives up to its name since on thick foggy days it gives the sensation of being in Olympus. Its beautiful citadel is all walled and its houses are authentic treasures of Gothic art. It is very pleasant to walk through its cobbled and zigzagging streets, contemplating its facades decorated with characters and animals from fables that give a special touch.

Walking through these passages we find the church of Saint-Miquel or the door of the Clock Tower that will make us feel as if we were in the past. To make a stop, nothing better than going to a cool place full of vegetation, such as the Jardin des Paradis, where we can rest from so many sensations.

Conques, the most beautiful town in France

This medieval town is located on the French Camino de Santiago. For some, it is the most beautiful village in France. Lots of pilgrims arrive here every day who usually stop to pray at the Sainte-Foy Abbey and then continue their journey to Santiago de Compostela. Thanks to this spiritual aura, the town gives off a special magic.

Walking through its cobbled streets gives the impression of going back to the Middle Ages. It is impossible not to marvel at its half-timbered houses topped by roofs made of slate. A true fairy tale image.

The best thing to do is to let yourself go and go without haste, since as you progress each corner is more surprising. Its most important monument, in addition to the abbey, is the castle of the Humières family. If you have time,  you have to go up to the viewpoint in the upper part of the town, from there the views are quite a spectacle. 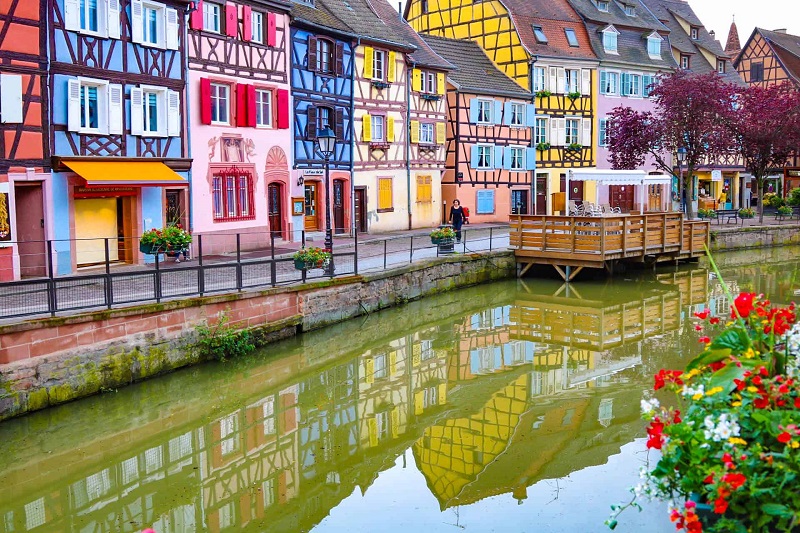 Colmar is bathed by the Launch river and belongs to the Alsace region. As a curiosity, this village has a certain German touch, probably due to its proximity to Germany. This is why some of its houses have a clear influence on German Gothic art.

It is one of the most beautiful and most visited villages in France. Many of its inhabitants live, in fact, from tourism. However, many of them also have wine businesses, something that has led to consider it the capital of Alsace wines.

One of its main attractions is Little Venice, a must-visit.   There is a boat that makes a beautiful itinerary through the area transporting us under all its bridges that we cannot miss. This neighborhood, with its colorful houses full of flowers and its narrow, well-kept canals, makes the traveler feel like the protagonist of a story.

Barfleur is a fishing village located in the Cotentin region and belonging to Normandy. The first thing that catches our eye upon arrival is the 17th-century church of Saint Nicolas, whose imposing shape will accompany us at all times.

Its formidable lighthouse has nothing to envy either. It has a height of approximately 75 meters and is located alone, in the middle of the sea and at the mercy of the crash of the waves.

However, the most picturesque is its colorful port, thanks to the boats that arrive daily loaded with delicious fish, shellfish, and mussels. The latter is recognized throughout the world for its delicious flavor and even has a variant with its own name, the “Barfleur blonde”.