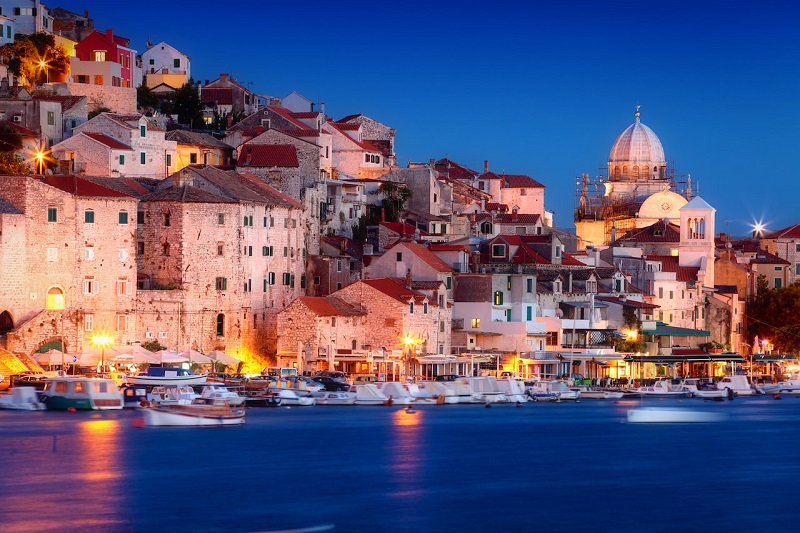 The Dalmatian Coast of Croatia has many jewels to discover such as Sibenik, a destination full of history and charm. It is one of the best preserved medieval cities, but it often goes unnoticed by other nearby tourist destinations such as Dubrovnik, Split, Korcula, or Hvar.

This small city near the estuary of the Krka river has incredible beaches, cobbled streets, churches, palaces, fortresses, such as that of San Miguel and the great Cathedral of Santiago, declared a Cultural Heritage by UNESCO.

All this makes it one of the oldest cities on the Adriatic coast founded by Croats. Despite being small, it has beautiful and valuable historical monuments that give it that incomparable beauty. We are going to know everything we have to see in Sibenik.

Sibenik is very connected to many islands, such as the Kornati Islands. An archipelago of more than a hundred very small islands protected by UNESCO, or the Krka waterfalls, very attractive destinations.

The city can be divided into two main zones: the modern part and the old part with the fortresses and the mountainside with narrow alleys. The city has a medieval quarter, a fabulous cathedral, and ancient palaces of great historical value.

It is not very big, so you will not need many hours to go through it completely. This beautiful enclave by the sea offers you many options to visit.

The jewel in Sibenik’s crown is the Cathedral of Santiago or Katedrala Sv. Jakova, declared Cultural Heritage by Unesco. It was built between the mid-fourteenth and fifteenth centuries, curiously it is completely built-in stone and its exterior ornamentation stands out.

It is the most iconic monument in Sibenik. Its large dome, which is more than 30 meters high, can be seen from almost anywhere in the city. On the sidewalls of its exterior, it stands out a frieze adorned with 74 heads representing the most important citizens of Sibenik at the time of its construction.

The lower part was designed by the architect Francesco di Giacomo, the upper part was completed by Juraj Dalmatinac in the Renaissance style and Nikola Firentinac completed the work. It was declared a World Heritage Site by UNESCO in 2001, after a thorough restoration.

The beautiful Gothic Lion Gate with its stone sculptures and ornamentation is worthy of admiration with the sculptures of Adam and Eve on both sides. The construction of the Cathedral began in the Venetian Gothic style and was completed in the Tuscan Renaissance style.

The Cathedral of Santiago was built on the south side of Sibenik on the remains of an earlier Romanesque church. Although it suffered extensive damage in the 1991 bombings, it was rebuilt with hard work.

It was erected by Michele Sanmicheli in 1532. It is the epicenter of the old town of Sibenik that houses a large number of important monuments for the city. On one of its sides is the Cathedral with the Portal del León and the opposite is the XVl century Town Hall.

One of the best things to do in Sibenik is to walk and lose yourself in its old medieval streets. The entire city center is pedestrianized so walking and exploring its narrow streets is a truly unique experience

The whole city is packed with narrow streets, climbs, and stairs that take you to its places of interest. In fact, they say that Sibenik is one of the cities with the most stairs in all of Croatia. Something that you should take into account if you travel with children, cars or have a mobility disability.

The fortress of San Miguel is located in the highest part of the city. You will be able to enjoy fantastic views of the bay in front of Sibenik.In addition to touring its walls and getting to know the interior of the Fortress. It has its origins in the Middle Ages, although its current appearance is from the 16th century. The entrance is paid, although it also includes a visit to the Fortress of the Baron.

Fortress of the Baron is reached by walking for about 10 minutes from the Fortress of San Miguel. It was built in 1646 to face the Turks.

Fortaleza de San Juan, located one kilometer from the center in the north of the city, is a building dating from the 15th century on a hill 125 meters away.

Fortress of Saint Nicholas, the work of Michele Sanmicheli in 1540, was built by the Venetians to face the Turks. It draws attention to its triangular shape.

It is a walk by the sea, ideal to enjoy a meal or drink and appreciate the life of Sibenik. It offers you views of the entire bay, together with the buildings in the background, it is a beautiful postcard to remember this beautiful city on the Dalmatian coast of Croatia.

We can’t talk about the Croatian coastline without mentioning its beaches. Like any coastal city, it offers beach options to enjoy the region. The closest one is located just 10 minutes walk from the historic center, it is called Banj Beach.

Being a little known place for tourism, it is more visited by Croats, therefore, its beautiful beaches are solitary and perfect to enjoy time without the bustling noise of tourists.

Gardens of the Monastery of San Lorenzo

It is a garden of the Monastery of San Lorenzo, it is accessed from a cafeteria-restaurant. This garden was abandoned for close to 100 years, but in 2007 it was rebuilt and opened to the public. It was developed by the landscaper Dragutin Kiš within the monastic complex.

It has four sections of medicinal herbs, as well as aromatic roses and other plants, which give the complex a particular beauty.

Sibenik and Game of Thrones (Braavos)

Like many other places in Croatia, Sibenik served as the location for the famous series Game of Thrones or Game of Thrones. In Sibenik, Arya Stark enters the free city of Braavos, where the Fortress of Saint Nicolas and the outlines of the wonderful buildings can clearly be seen in the background.

This Dalmatian gem played the role of the mighty banking center of the Seven Kingdoms, and the Cathedral of Santiago de Sibenik, a building under the protection of UNESCO, became the Iron Bank, the most powerful financial institution in the series.

The Kornati archipelago is located in North Dalmatia, south of Zadar and west of Sibenik. It is another of the most wonderful National Parks in Croatia. It is located along the coast of Sibenik, with more than 140 islands it is the largest in the entire Mediterranean.

Sailing through the Kornati Islands is an ideal experience for lovers of the sea and nature. The archipelago has two national parks, the Kornati around the island of Kornat and Telascica, on the island of Dugi. In addition to endless paradisiacal beaches, charming little towns, and exquisite Croatian cuisine

When to travel to Sibenik?

There are important dates to take into account if we travel to this city. For example, at the end of June, the International Children’s Festival takes place. A unique opportunity if we travel with children since they themselves will be the protagonists of the leisure hours.

During August the Klapa nights will take place. It is a perfect time to enjoy traditional Dalmatian music live, as we will find a large number of events related to it.