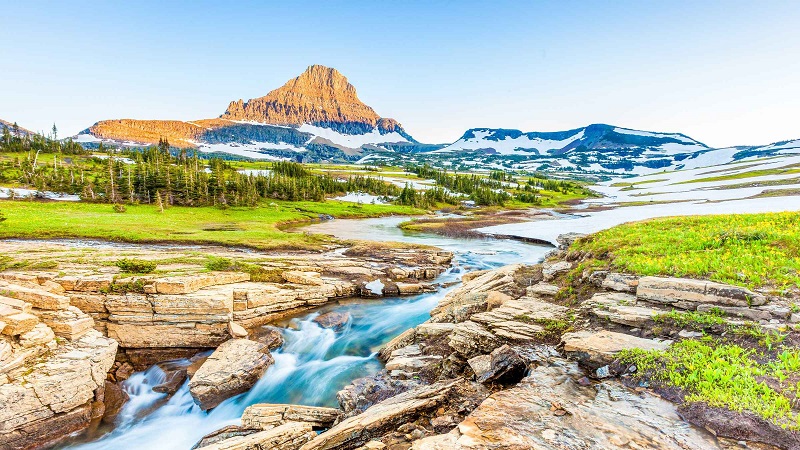 Visiting a  national park like Yellowstone or Yosemite is the most coveted time of the year for many people. Yet all too often, careless tourists leave their mark on these revered landscapes, and their impact lingers there long after their brief visit ends. Some damage even lasts for decades, such as footprints left in biological soil crusts when leaving marked trails in Canyonlands, Arches, and Capitol Reef National Parks.

A number of exceptionally bad (even criminal) behaviors have been witnessed in recent years: the crash of a drone in the Grand Prismatic Hot Spring in Yellowstone National Park, the illegal use of ATVs in Death Valley National Park, the spray painting of rocks and cacti in Joshua Tree National Park and the marking of sandstone with blue dots, as if it were a ridiculous “art project”, in Zion National Park. The shamelessness of some of these behaviors is unheard of.

And yet, it’s not just these inconsiderate behaviors that damage parks. Very often well-intentioned visitors cause damage unintentionally. They trample rare flowers or moss over 100 years old while hiking to reach a point with better views, carelessly let trash fly out of their backpacks, or relieve themselves in inappropriate areas. Even more frequent is the case of tourists who approach moose, deer, and bison to get the perfect photo for Instagram and cause the animals to flee. This may not seem like a problem at the time, but in northern national parks like Yellowstone, where moose need to conserve all possible calories to survive harsh Montana winters, be scared off by tourists, even if this only happens a couple a few times a week, it can deplete enough stored fat to keep them from surviving the snowy season.

Now that many people are eager to get outdoors and explore, the national parks have seen a surge of visitors, all the while facing staff shortages, limited services, and the unease caused by social distancing, both on the part of visitors. as of the staff. National Park Service (NPS) rangers report that they have found face masks thrown along roadsides, more feces than usual at trail entrances (due to restroom closures), and first-time park visitors who generally misbehave. And sadly, a large part of this damage is concentrated in the most popular and spectacular areas of each park.

The Great Smoky Mountains National Park, which saw a 40% drop in visitors between January and May, has seen a surge of visitors in its popular areas like Clingmans Dome and Cades Cove. “Our field staff reports busy roads, congested parking areas, and crowds at some of the most iconic destinations,” says park spokeswoman Dana Soehn. “So, although the number of visitors, in general, has decreased, it does seem that the main areas are more crowded than usual.”

This three-word phrase is the foundation for ethical behavior in parks and has long been an essential component of what constitutes protocol in wilderness areas. But now that many garbage collection services and sanitation facilities operate at limited capacity, it is more important than ever. If you take it to the park, take it with you when you leave. This applies whether you’re backpacking in Zion National Park or just taking a drive through Shenandoah National Park. The park service, especially during the pandemic, is not prepared to collect the trash of thousands of visitors each day. “Today we have far fewer volunteers actively collecting trash,” says Soehn. “And we have really noticed the difference.

2. Bring your own water

Visitors to the parks produce a lot of garbage, but one of the most common objects is disposable water bottles. Avoid using them and carry at least one or two reusable bottles per person. Then buy a 3-gallon reusable water jug. Fill all the containers before you go and do it again every night at the hotel. You will have plenty of water to fill the small bottles throughout the day without having to buy a disposable bottle in a store (which you will have to throw away later).

3. Stay on the trails

This may seem obvious and yet every year thousands of people ignore this advice. Many are lost or injured. But it can also be harmful to the environment. The NPS strives to create and maintain trails – they install berms, clear trees, build stone stairs – to maintain a delicate balance between natural beauty and the millions of people who explore it each year. The trails may appear identical to the natural areas that surround them, but they are designed and built to endure a lot, as long as visitors use them. Sometimes a trail widens when people take shortcuts to shorten switchbacks or cut their way through trees to reach, for example, an unmarked cliff. The constant trampling has a cumulative effect and can easily cause problems during a storm and start a process of soil erosion. Staying on the trails is the easiest way to have little or no impact on the environment.

Too often visitors flock to the same tourist spots over and over again. This causes delays on the trails and puts more pressure on those areas of the park. Before you go, be sure to choose several alternative hikes or places to visit in case the trail entrance is too crowded. Even in the most popular parks, there is almost always somewhere you can go to get away from other tourists. And of course, avoiding crowds makes sense, especially during the pandemic: “If access to the trail or parking area is very crowded,” says Soehn, “this is a clear indication that it is going to be very difficult to keep your distance. the physicality between people once everyone gets out of their cars and heads to their destination. “

5. Put rubber bumpers on the ends of your hiking poles

Look closely at the busy trails and you’ll undoubtedly see the telltale markings on the metal tips of the hiking poles. Scratches, nicks, and marks are everywhere as if an eagle with diamond talons had sharpened them on the landscape. It is a big problem in many parks, especially those in the eastern part of the country, which tends to have more traffic. Put rubber bumpers on the ends of your hiking poles (you can buy these at REI and other outdoor supply stores). You will achieve better traction, you will not have to listen to the constant clicking and you will help protect the environment.

If you are camping in a wilderness area,  find your own space. Don’t choose an area that has been trampled recently. Herbs can usually survive one night under the space that a tent occupies, but it is difficult for them to survive any longer. By selecting a campsite in a remote area that has clearly been used by someone else recently, you may be creating a huge space without vegetation without even realizing it, as it may not appear until long after you’ve left. We emphasize that this should only be taken into account when camping in remote areas. In designated camping spaces, set up your tent in the same spot as other people to limit the damage to a single area.

7. Do not disturb the fauna

Any interaction with a wild animal will almost certainly be detrimental to the animal. This does not mean that you cannot enjoy watching bison traverse a road in Yellowstone or a bear walk atop a ridge in Glacier National Park. Just keep your distance – most parks ask visitors to stay at least 50 yards away – and stay away from them to take photos. Stalk them for a closer look like you’re a National Geographic nature photographer  It will probably end badly, for you or for the animal (or for both). If you’re serious about photography, get a telephoto lens that is over 250mm. Don’t you intend to sell your images? Stop taking pictures and get a good pair of binoculars. You will be able to observe the fauna in a comfortable and safe way from afar, without the animals realizing that you are there.