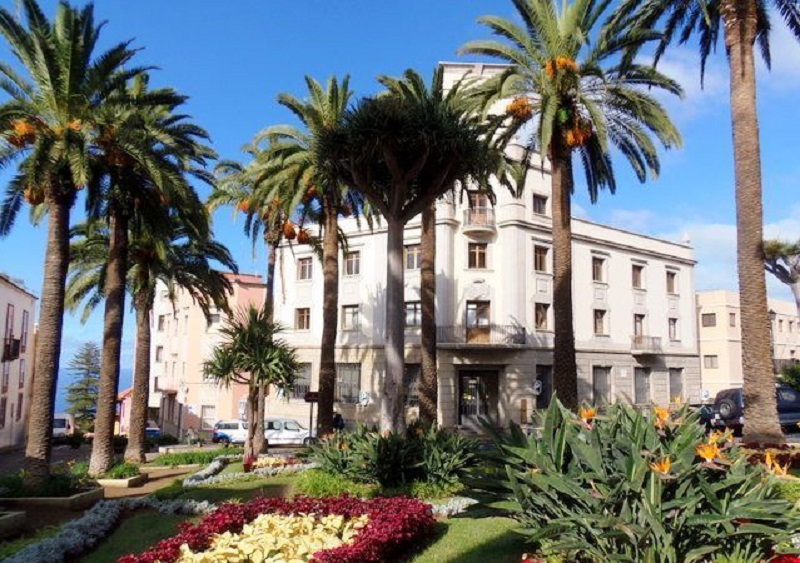 8 beautiful towns in Tenerife you must visit

Tenerife is much more than sun and beach, we live in Canaria s we know it well, but that image is what prevails in most people who choose the island to enjoy a well-deserved vacation. And in part, they are right, especially if we stay in the coastal area of southern Tenerife. But tourists and curious travelers want more. It is why I encourage you to recommend some towns and cities that also deserve to be known.

8 towns that you should visit in Tenerife 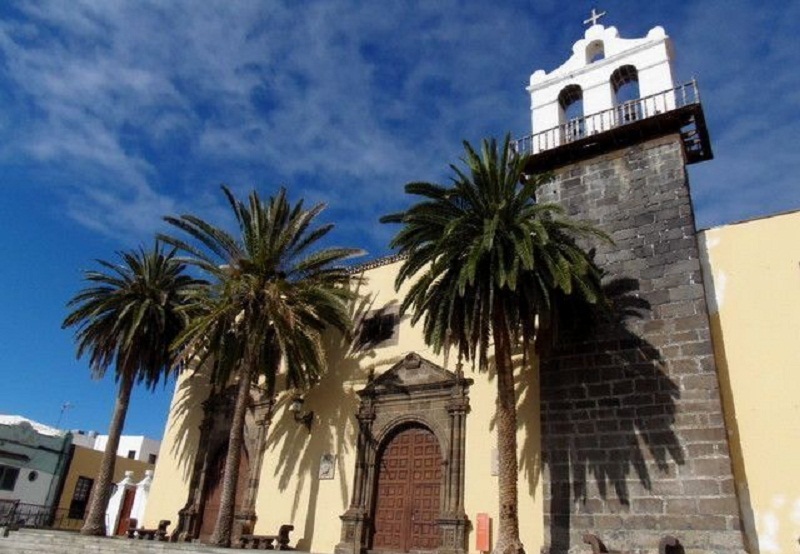 It is one of the most charming villages on the island and one of those that best preserve its historical and artistic heritage. It had to be rebuilt in the early 1700s when a volcanic eruption devastated the thriving population and first capital of Tenerife.

Garachico is a quiet place, with natural pools for a swim – El Caletón. The narrow streets to walk around and a nice central square where you can sit and enjoy the moment, among other attractions.

How to get there: From Santa Cruz de Tenerife you only have to take the TF-5, bordering the north coast of the island to the west. Then follow the TF-42. They are about 63 kilometers. 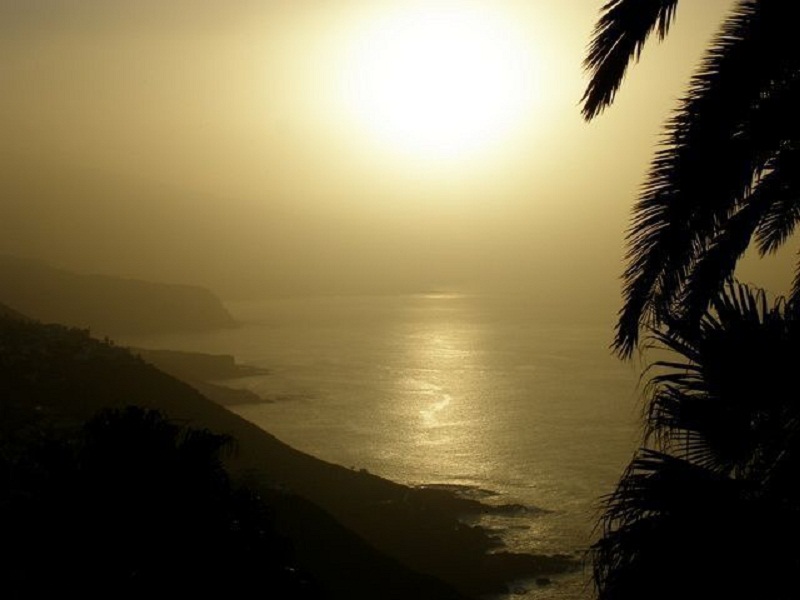 If you have decided to visit the northern part of Tenerife and visit Garachico, I suggest you include a stop at El Sauzal on your route, especially on your way back. So that, you can enjoy a beautiful sunset from some of its terraces and viewpoints. The town is small and pretty, and the central town is easily visited although here the steep slopes are part of the attraction.

How to get there: From the TF-5 you just have to follow the signs and take the detour to El Sauzal, on the TF-172. 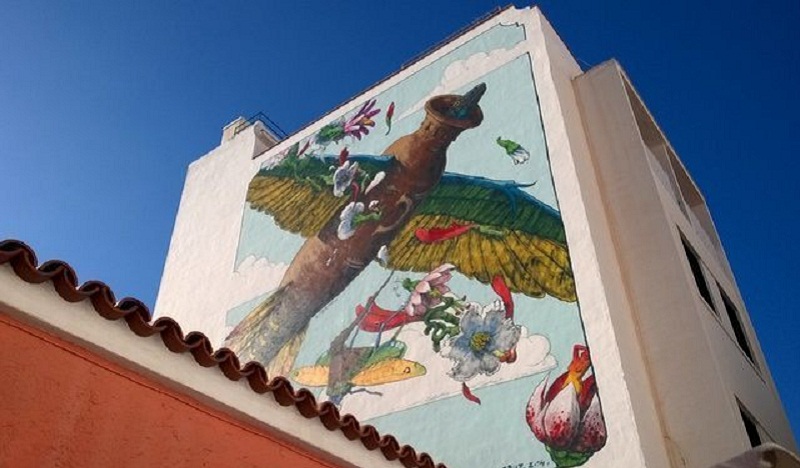 It is the smallest municipality of Tenerife, but having one of the best climates on the island has made it the first tourist center of the Canary Islands. It was declared a National Tourist Interest Site in 1955 – and also one of the first in Spain, within the European scope.

In recent years, Puerto de la Cruz has been renewing and when I visited recently, I liked to walk through some of its streets, with the facades of houses almost as freshly painted, with small and well-kept squares and huge murals. It decorate the facades of a few buildings in the fishing district of La Ranilla. This commitment to art – Puerto Street Art – is a complement to other attractions that include a historical center with more than 140 protected buildings, the Lago Martiánez swimming pool complex (designed by the Canarian architect and artist César Manrique). The Parrot Park, which has received more than 40 million visitors since 1970.

How to get there: Puerto de la Cruz is about 37 kilometers from Santa Cruz de Tenerife. Take the TF-5 and then, at exit 32, follow the TF-31. 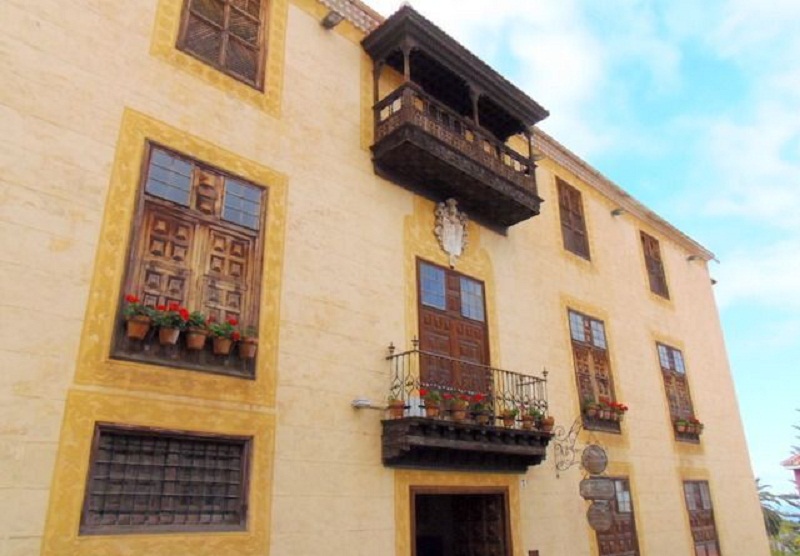 If the Puerto de la Cruz reigns on the coast of the Orotava Valley, for much one of the most beautiful valleys of the Canary Islands. The small town of La Orotava dominates in the highest part and at the foot of Mount Teide. After La Laguna, it is one of the places I like most in Tenerife and not only for the views.

Here came the high society of the island, something that is not difficult to guess by the number of mansions and palaces. Mainly of the seventeenth and eighteenth centuries, which gather around its old town, declared an Artistic Historical Site. Part of this heritage is known as Las Doce Casas, houses of traditional Canarian architecture, among which the Casa de Los Balcones, Casa Torre Hermosa, Casa del Turista, and Casa Lercaro stand out.

Other emblems of the elegant and beautiful city are the Church of San Agustín in the Plaza de la Constitucion. The house of the Monteverde family, which is now a cultural center. The Marquisate Garden of the Quinta Roja or the Town Hall, which occupies the place of an old convent and in whose square it is made. Since 1905, a giant carpet for Corpus Christi and for which materials such as salt and sand from Teide are used.

How to get there: In just over half an hour it is possible to be in La Orotava, driving from the capital of the island. It’s about 36 kilometers on the TF-5 motorway. 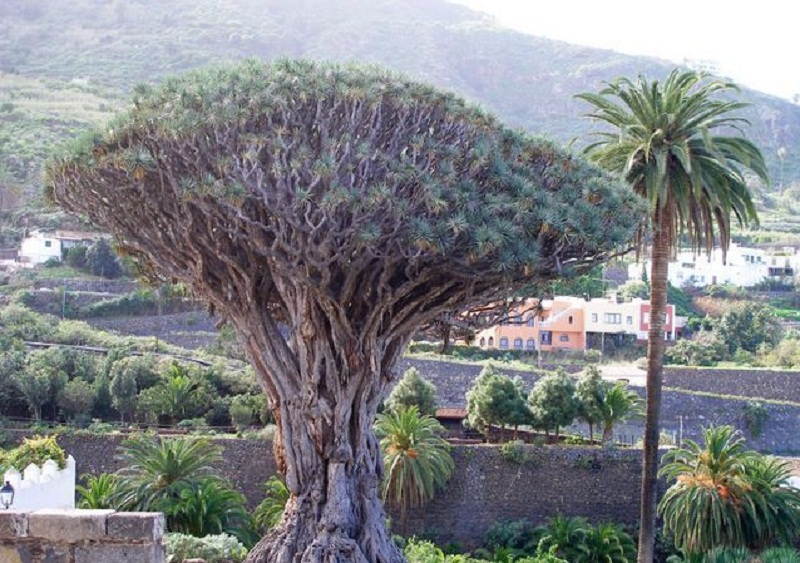 This is another of the towns located in the north of Tenerife, halfway between La Orotava and Garachico. It may not stand out among the most beautiful villages on the island. It attracts thousands of visitors for its emblematic Millenary Drago. I remember that as a child it was very easy to approach the mysterious tree. In the day, you have to pay an entrance to enter the park that protects it or observe it from the top of a nearby square.

I’ve never been, it seems interesting to pay a visit to the Cueva del Viento. One of the largest volcanic tubes in the world. If gastronomy or enology tempts you more than adventure, take the opportunity to taste some of the wines produced in the municipality

How to get there: From La Orotava, you only have to follow the TF-5 for about 24 kilometers. You can take a longer route, with a detour on the TF-342 to add Los Realejos and La Guancha on your walk. 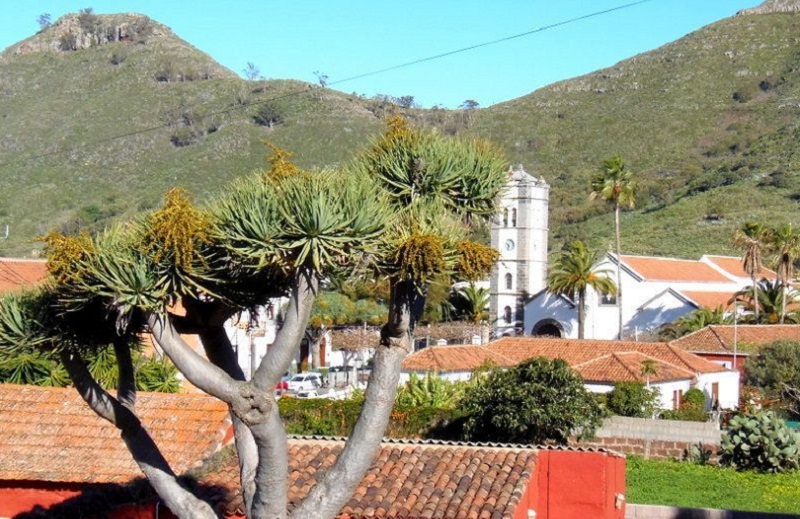 The Villa de Tegueste, with a long agricultural tradition, sits next to the Anaga mountain range. It is a small place, with some examples of traditional Canarian architecture, which in recent years has tried to position itself as a wine tourism destination. Here is celebrated as one of the biggest pilgrimages of the Canary Islands, that of San Marcos, and the Dance of Flowers is still preserved, like more than five centuries of history.

How to get there: A few kilometers from La Laguna, the ideal option is to take the TF-5 to connect with the TF-13 or take the TF-154 via El Socorro. It is allowing you to enjoy the vineyard landscape. 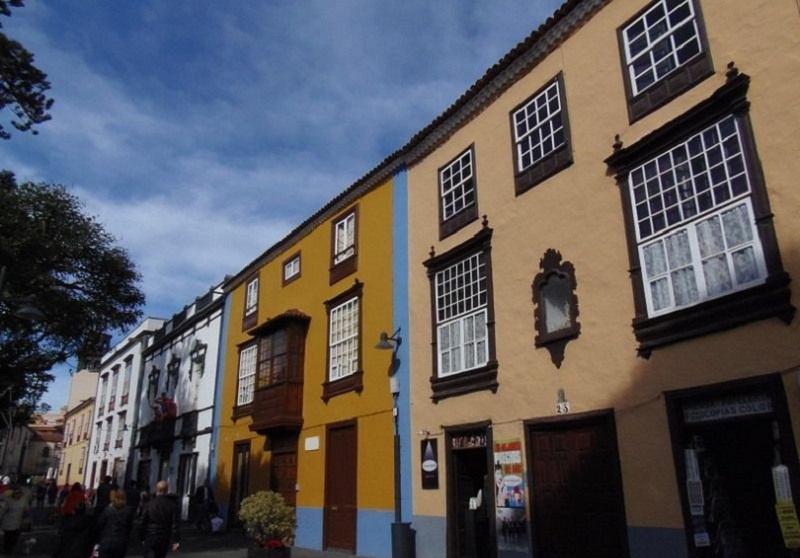 In this case, it is not a town. La Laguna is one of the largest cities in the Canary Islands and home to a university that welcomes more than 30,000 students. It was declared a World Heritage Site by UNESCO in 1999. It is a must-see, whether it be for a stroll through the streets of this town that was founded in 1496, to go shopping. Simply for tapas or go for drinks, because La Laguna is full of small bars and restaurants.

The way in which the city was built, in a grid, was quite a revolution in its time since in Europe the concentric model was still being followed. The one that makes you feel like you are walking through a labyrinth. It was also the reference for the design of most Latin American cities during the colonial period. 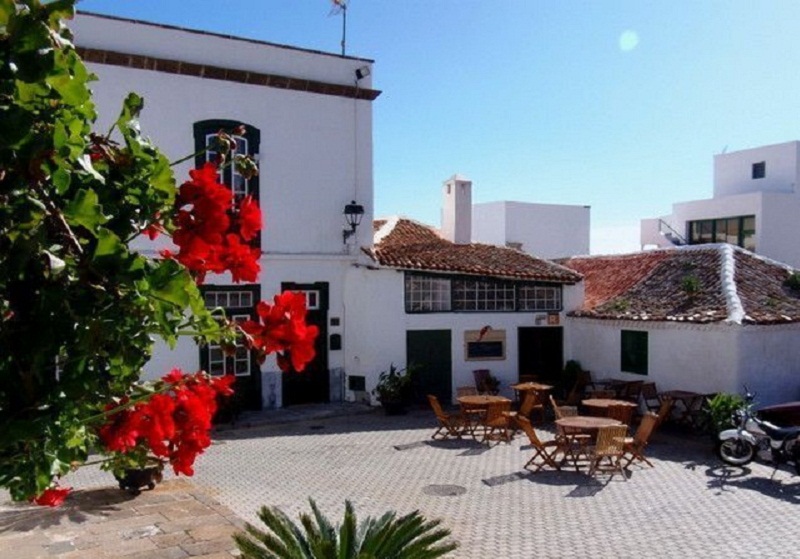 Not only the northern part has towns that you should visit in Tenerife. In the south, there are also small towns that have their charm. It is true that I have to admit that this area I do not know so well, but if there is a place I can suggest is Arico El Nuevo.

With just 180 inhabitants and almost in the middle of nowhere, this nucleus was founded in the 18th century when water springs were detected in the surroundings. It is declared a Historic Site, and some old houses are still preserved, with simple facades, but with typical elements. You can also visit the Villa de Arico, capital of the municipality, whose foundation takes us to the year 1590. Its center was also declared a Historic Site and highlights, above all, the Church of San Juan Bautista, Historical-Artistic Monument since 1985. 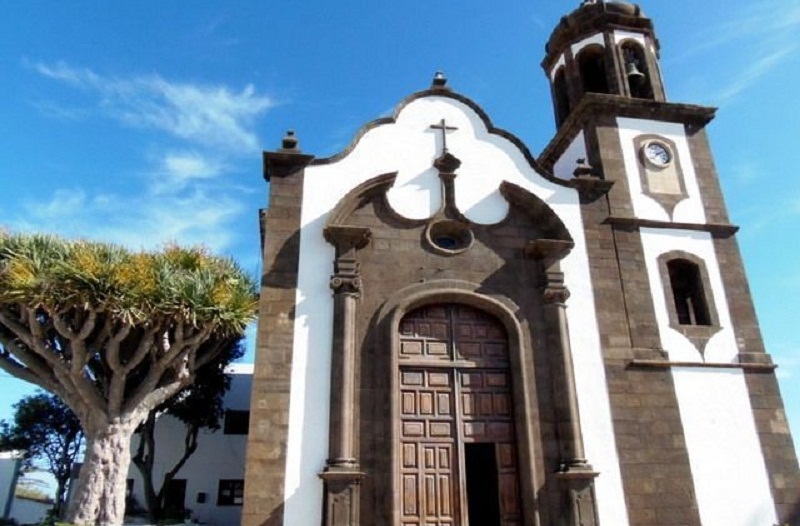 Arico is the second largest municipality in Tenerife and can also boast small coastal towns where you can enjoy good seafood, such as Tajao and Porís.

How to get there: before visiting Arico el Nuevo and the Villa de Arico, I recommend you check the GPS or go with Google Maps. It is a bit complicated when you have to combine several roads. You start with the TF-1, from Santa Cruz de Tenerife, then connect with the TF-625 (Arico el Viejo) and finish at the TF-28 (Arico el Nuevo). The route does not reach 50 kilometers.