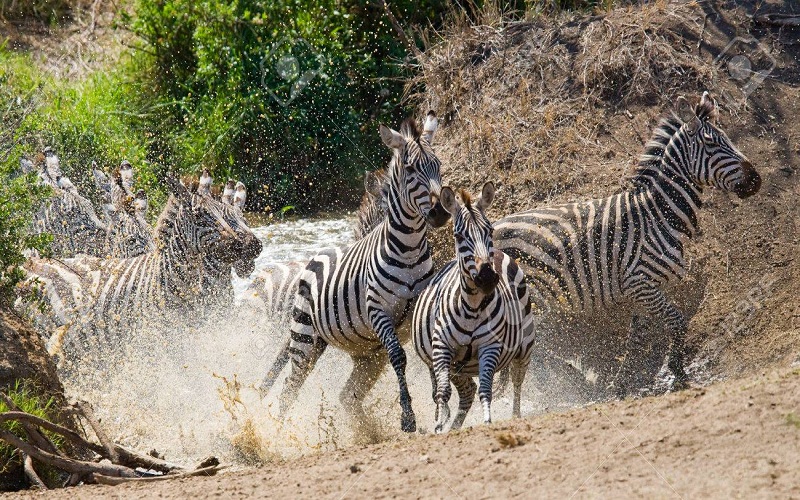 Of all the recognized natural benefits of Kenya, Maasai Mara is the one that most fascinated among the animalists. In summer, the great migrations and the herds begin their pilgrimage to more fertile lands. A struggle for survival during which nature presents a unique spectacle. Our trip -safari in Swahili- starts with the bucolic picture of the endless plains that, sprinkled by some yellow acacia, leaves in its wake the Mara River in the Maasai lands. This image, which inevitably evokes films like Mogambo or Memories of Africa, anesthetizes our anxiety to discover the world, submerging us in a peaceful reverie that, far from sharing symptoms with Stendhal syndrome, invites us to be part of the miracle of life. The Maasai Mara Nature Reserve consists of 320 km2,

Scenario of the great migration, this reserve has become a complex framework of transitable roads in 4 × 4 tourist, which cross the main companies of safaris in the area. The all-terrain vehicles that transport tourists are connected to each other by radio; If a car sees an animal of interest in a certain place, the driver informs by the walkie-talkie and the nearest vehicles can take advantage of the find. A hunting lioness, a leopard in the middle of the race or a herd of wildebeest grazing by our side are just examples of everything that can be seen if it is hit at the time and place. Some clueless hippopotamus in search of a pond, hyenas in search of carrion and gazelles grazing in continuous alert state are only part of the day to day in these soft hills that make up the African savannah. 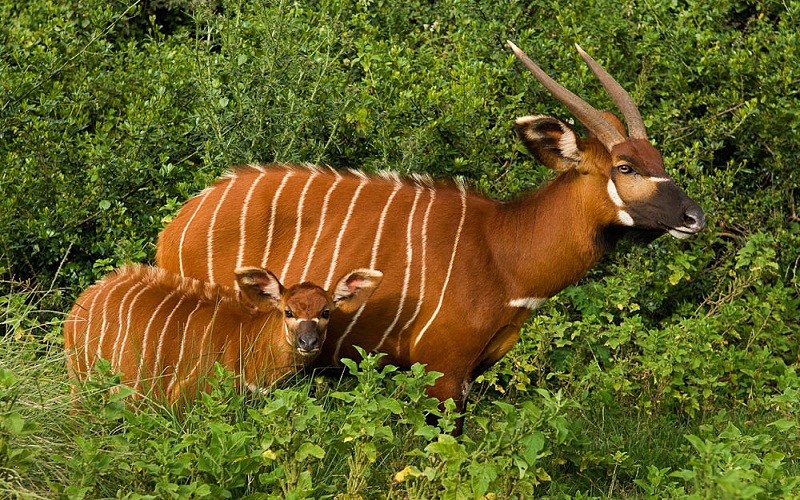 The Maasai tribes are the other image of the park. The closest thing to a city is at the gate of the park, Maasai Mara Town. Afterwards, only small towns scattered among the savannah are seen. Among these population centers there are several destined to show the tourist the Maasai way of life and its more atavistic rites. The Maasai, happy, show the visitor how is the organization of their manyattas, the Maasai villages. Their huts, made of mud, straw and animal excrement, are arranged in a circle, whose center becomes the meeting point of the town as a main square. Here the Maasai elders transmit their wisdom about life to the younger ones. In the tribes it is easy to identify the moran, adolescents who, after a ritual of circumcision and four years in nature, they return to the village converted into warriors to take a wife and leave with her to form a new settlement. The shuka, the traditional Maasai dress, dyes red a rough and exciting landscape dominated by black and ocher tones. They also draw attention to the showy dilations that appear on the ears of both men and women, which adorn with wooden circles and colored beads.

The Maasai, people of hunter character, have been forced to migrate, and it is easy to find some leader who gladly agrees to share those distant times in which the man, only equipped with his spear, looked face to face with the lions. Mix of literature, exaggeration and superhuman prowess, the truth is that this cultural exchange has become an enriching formula for tourism, where the imagination of the traveler flies to an era that refuses to be forgotten. The Maasai, in return, take out a handful of dollars with which to subsist between extreme austerity and the infinite pride of keeping alive the ancestral flame of an ethnic group of which there are barely 800,000 people left.

John Barry could be in charge of putting the music to this mystical trip to the cradle of man. The prolific British musician, who died earlier this year, composed the soundtrack for Nacida libre. The 1966 film shot in Kenya and based on the relationship between nature and man, won two Oscars for the best soundtrack and the best song. Memories of Africa is another of its cinematographic milestones, being the central theme of the film one of the most evocative sounds of the extensive plains and one of the most recognizable themes of Barry’s long career. He reported another of the five Oscars with which the Academy wanted to acknowledge his great work. For the long days in the Maasai Mara, many drivers of the 4 × 4 opt for the claim Lucky Dube. Considered the most influential reggae singer of the 20th century, Dube is a musical reference in black Africa. South African by birth, his message caught on in Kenyan society. Its last disc, Respect, was a song to the peace and a ferocious rejection to the citizen insecurity. Dube was killed in Johannesburg on October 18, 2007, at 43 years of age. That’s when the myth was born.

Hotels: Awakening with the sounds of the savanna 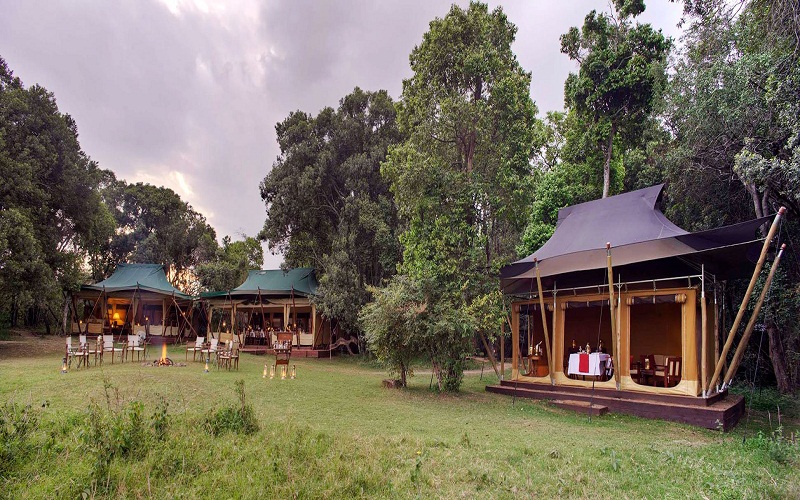 Maasai Mara, as a tourist destination, is designed for travelers with an important purchasing power. The dry season, between the months of July and October, is when there is the greatest concentration of fauna. The wet season, from the end of January to March, is when grass is abundant in the plains, but it is more difficult to see the animals. There are numerous luxury accommodations, integrated into the National Park, which have all kinds of facilities and services. Choosing an accommodation among all five-star hotels is a difficult task. Fixed the budget, it is still necessary to define the location and the type of accommodation. The most common is to stay in a hotel-camp -that is, a protected area-, with luxury tents and several common spaces .Sarova Mara Game Camp. The Sarova chain has seven hotels spread over the most important places in Kenya and East Africa. The Mara Game Camp is a complex composed of 73 tents, twenty of them luxury, other 51 standard and two family. The facilities are complemented by two pleasant pools with views of the plains, a rustic minigolf, the restaurant and various rooms with capacity for the organization of events and incentives. As a recent novelty, the couple formed by Jorge Alesanco and Mariola Liberal run the facilities of the Cheetah Tented Camp, the first camp run and attended by Spaniards in the Maasai Mara. It is a tented luxury camp that has planted its stores next to one of the steps of the Great Migration, which occurs from June to October on the Mara River. Other camps, some of which include all kinds of amenities, candlelit dinners surrounded by nature, a la carte restaurants, incredible views over the savanna, the mountains and the Mara River, are Leleshwa Camp, Mara Explorer Camp, Mara Intrepids Center Camp, Kuoni Mara Bushtops Camp, Kichwa Tembo Tented Camp , located in the northwest part of the Reserve, and the Sekenani Tented Camp, the latter managed jointly by several Maasai families.

Offering a barbecue and views of the garden, Maasai Restaurant & Resort is located in Bamburi, 400 meters from KWS Box Office for Mombasa Marine Park. The hotel overlooks the garden, playground and bar. There is free private parking.

All rooms have air conditioning and TV. Some units have a seating area. Some rooms have a terrace or balcony. Maasai Restaurant & Resort features free WiFi throughout the property.

Driving from Nairobi to Masai Mara 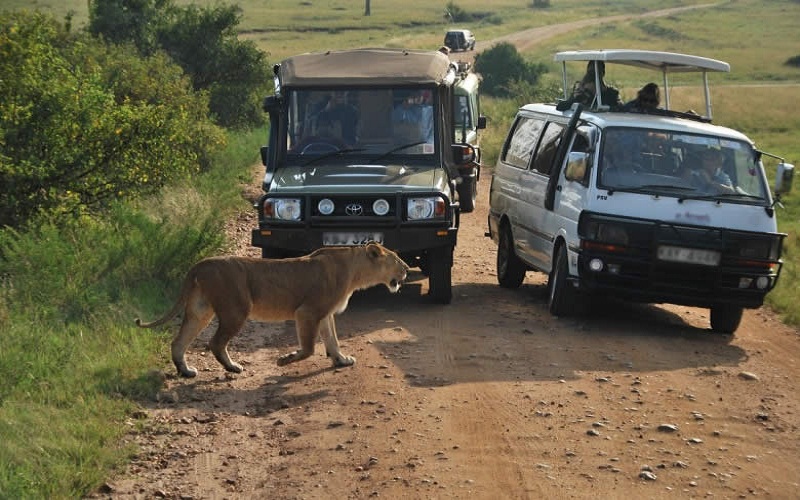 Driving from Nairobi City Center is 5-6/hrs depending on where in the Mara your lodge/camp located. By driving you have the same guide/vehicle at your disposal for game drives and other activities exclusively.

Of course, flying is faster, but flights depart from the Wilson domestic airport, so even if you arrive at the international  airport, you’d have to be transferred for flight to the Mara. Flying time is about 50/min, but can take longer depending on whether you’re first or last stop… these flights do stop at a few airstrips. Return air is about $300/person, plus cost of transfers between airports.

If flying, once in the Mara your game drives and activities will be conducted by lodge/camp at which you stay, on a shared basis with other guests. You do have the option to arrange for exclusive use of vehicle, but this comes at a price of anywhere bet. $250-$400/day.

Finally, Maasai Mara National Reserve is a large game reserve in Narok County, Kenya, contiguous with the Serengeti National Park in Mara Region, Tanzania. It is named in honor of the Maasai people  and their description of the area when looked at from afar: Mara, which is Maa  for spotted, an apt description for the circles of trees, scrub, savanna, and cloud shadows that mark the area.

You may also like Travel and Tourism: The future of the sector in the hands of the Internet and social networks