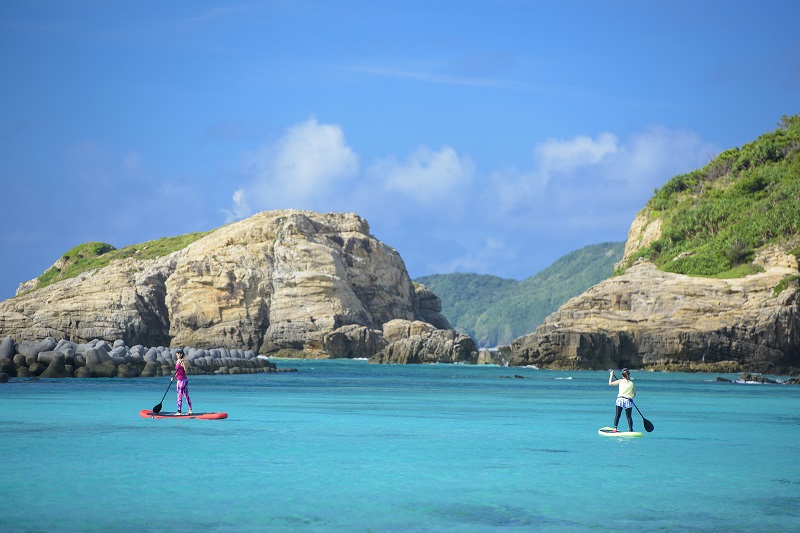 Located on the main island of the prefecture, Okinawa-Honto, and near the capital, Naha is the Shuri Castle, whose name comes from the old place name of the capital. Standing on a hill with spectacular views of the city, this bright red construction stands as a reminder of the power of the Ryukyu kings between the 15th and 19th centuries. Although what is seen now is a reconstruction, the original was almost completely destroyed in the battle of Okinawa in 1945, its beauty is still palpable, and the difference between the architecture of this castle and the rest of those that exist in the territory Japan is a good example of the differences between Okinawa and the rest of the country. 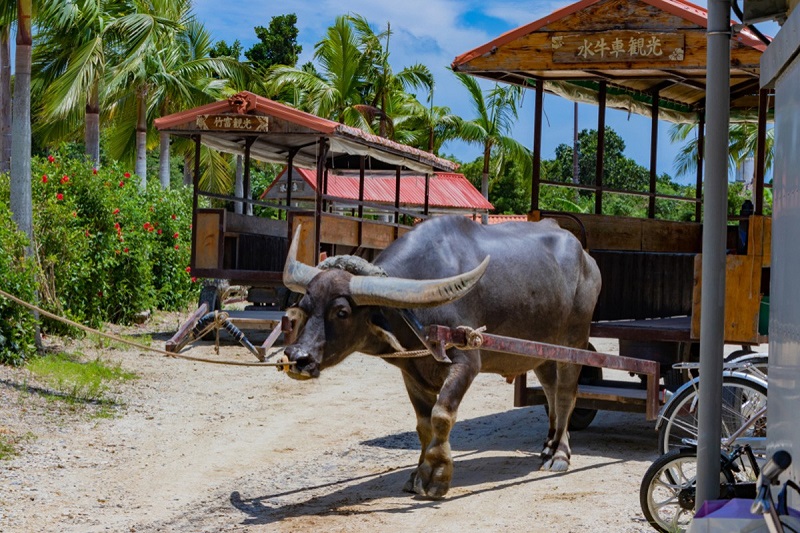 For the inhabitants of Taketomi Island, it is so important to maintain the beauty that characterizes the island, that there are rules to prevent tarnishing it with modern constructions. Thus, for example, the roads in the area are still white sand instead of concrete. This island is perfect for biking, enjoying its architecture, low-rise houses with reddish roofs, snorkeling surrounded by beautiful corals, or for taking a ride on a cart pulled by buffalo, a unique experience that cannot be lived in any other place in the Japanese territory.

Walk among the gods at Sefa Utaki 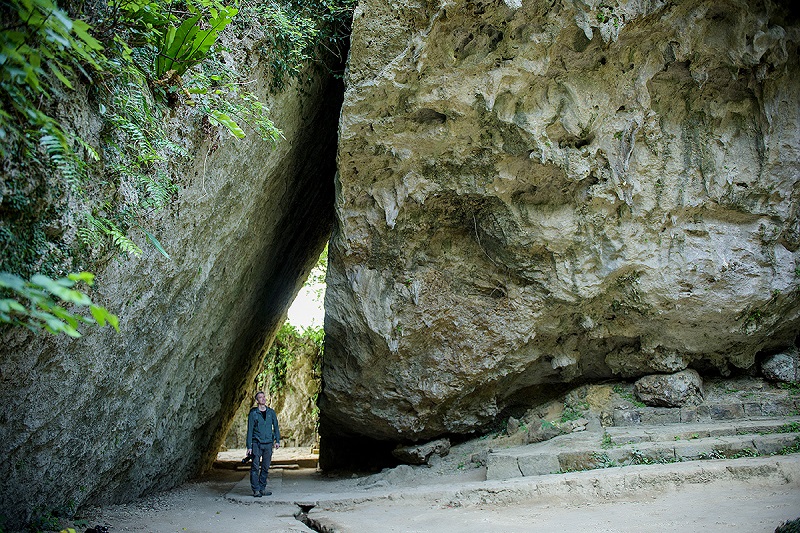 The name of Sefa Utaki could be translated as “the highest sacred land”. And that is why this place is one of the most sacred for the indigenous people of Okinawa. The Okinawan religion, like Shintoism, says that the gods are the light, flora, and rock formations that surround us, and therefore the places of prayer of the followers of this religion are in the middle of nature. Although in this place there are no great architectural constructions of a religious type, as is the case with Buddhist and Shinto holy places, the force that emanates from this place is fascinating. In addition, the walk in the middle of nature. With paths that connect all the sacred rocks, is worthy of a Hayao Miyazaki movie. In the past, only women could enter. But nowadays everyone is well received. Yes, you have to be very respectful as it is a sacred place.

If you go to Okinawa and love the sea, you should try diving at least once. Throughout the archipelago, there are key points where you can enjoy fascinating experiences. Both swimming among corals, with turtles or simply enjoying the calm waters of this part of the world. Among these key points, one of the most incredible and unique is found on Yonaguni Island.

This diving area, still a mystery to many, attracts hundreds of divers every year due to the strange stone formations that it houses in its depths. The rocks are cut so perfectly that they look like man-made stairs. In winter, if you are lucky and brave enough. You can dive among the hammerhead sharks that visit the area every year. In addition to diving, Yonaguni Island has other attractions worth visiting, including the Irizaki Lighthouse. 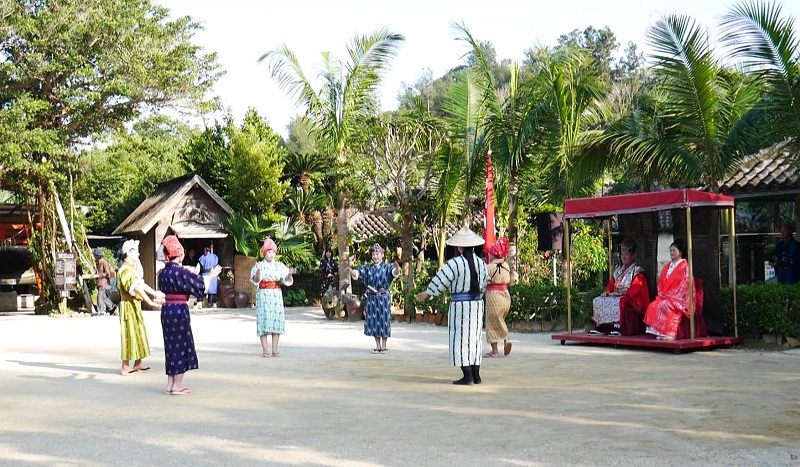 Ryukyu Village, Ryukyu Mura in Japanese, is a great way to see how Okinawans lived under Ryukyu before it became part of Japan. The recreation of the architecture and customs of these first islanders is very well done. In addition to walking through streets where it is easy to feel that we have traveled to the past. In the town, you can also see performances of dance, theater, and traditional music. Also, if the visitor is thirsty, drinking coconut water is a delicious way to appease them. Ryukyu Mura is located north of Naha, on Okinawa-Honto Island.

Forget about civilization at Maehama Beach

Considered the most beautiful beach in Japan, this beach, located on the island of Miyako. South of Okinawa prefecture, lives up to its fame. A place where the clean white of soft sand mixes with the turquoise of a sea that is almost always calm, this beach is perfect for relaxing. If the traveler also wants to imagine that he is a survivor on a paradise island. He has it easy on this island since there are so few people that it seems to be semi-desert.

Marvel at the marine world at the Churuami Aquarium

In Okinawan dialect, the name of this aquarium means beautiful sea, and this designation fits perfectly. Built in 2002 to show the world the impressive marine and cultural life of the archipelago, this Aquarium is a true work of art. Churuami is the second largest aquarium in the world, but this is not the only amazing thing about the place. With species from both surface and great depths, its own barrier reef built in one of the tanks, whale sharks, protected beaches where you can see sea turtles in their natural environment, a traditional Ryukyu village, and even a forest, this aquarium is A must for lovers of marine flora and fauna who want to learn a little more about the wonders of Okinawa.

Today Okinawa is a paradise area surrounded by an aura of tranquility and stillness. But the history of this prefecture is surrounded by struggles for its independence and sad events. The main island, Okinawa-Honto, witnessed some of the bloodiest battles, which occurred during World War II, when the United States invaded the island, killing hundreds of thousands of civilians.

All these battles have left a deep wound still half-healed in the people of Okinawa, and it is to commemorate the terribleness of the war, and to remember the hundreds of thousands of civilians who lost their lives in it, that the Park was built. Peace Memorial. It contains the Memorial Museum, the Pillar of Peace. The Himeyuri no to the monument, and the underground headquarters of the old navy. The walk does not leave you indifferent. And despite its hard theme, it is worth it to learn about the tragic history of the island.

North of the main island of the prefecture is Yambaru National Park. The largest evergreen subtropical park of its kind in Okinawa prefecture. Whether you want to go hiking, observe animals in their natural habitat, or practice adventure sports such as kayaking, all of this is possible in this park whose flora and fauna take your breath away. Among some of the species that can be observed are the spiny frog, the Ishikawa frog, or the Okinawan long-armed beetle.

Stroll down the street of Kokusai Dori, in Naha

Naha’s main street, Kokusai Dori, is a perfect place to observe the different cultures and influences that made Okinawa what it is today. With its neon lights, its vitality, and its many restaurants. The visitor will have an unforgettable experience getting lost among the natives of the capital of the prefecture.

In addition, the Kokusai Dori is perfect to try the gastronomy of the archipelago: from the classic champuru and Umi budo, typical dishes made with goya seaweed, to the Taco-raisu recipe, with clear American influences, the food of this archipelago is a festival for the senses. To drink, it is recommended to try the delicious Orion Beer and then go to any Karaoke to sing a traditional song of the island.