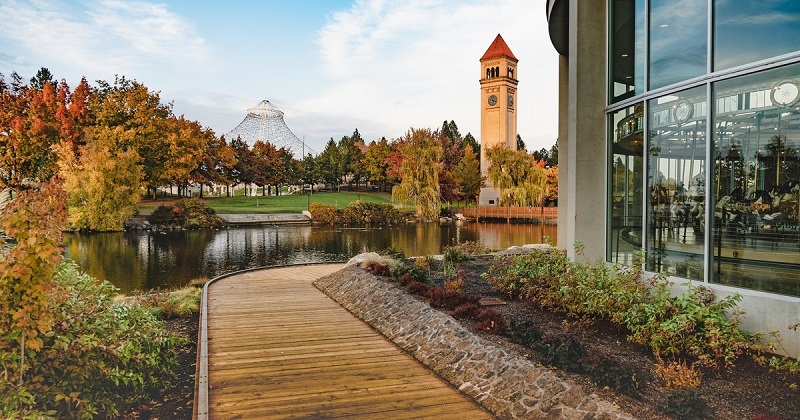 Just 20 miles from the Idaho border and more than 280 miles east of Seattle. Spokane is the cultural center of eastern Washington and the second-largest city in the state. While the sunny weather and high desert landscapes in Spokane differ from western Washington cities, much of what people associate with the west coast of Washington can be found inland on the beautiful streets of Spokane. Whether it’s outdoor adventure or art museums, Spokane offers attractions for all members of the family and is well worth considering on your next Washington vacation.

A defining attraction of Spokane, Riverfront Park is 100 acres of downtown land that offers residents and tourists the opportunity for outdoor fun and cultural experiences. Riverfront Park was first founded in 1974 when Spokane became the smallest city to host the World’s Fair. In preparation for the big event, Spokane tore down the Great Northern Railroad Depot in downtown Havermale Island and built cozy spaces and attractions in its place. The largest structure built for the World’s Fair was the huge United States Pavilion, which was large enough to house trees and represent the country to a crowd of more than 1.5 million people.

Today, the US Pavilion remains a landmark in Riverfront Urban Park, although as planned, the canopy was removed and the skeletal structure of the Pavilion is all that remains. Visitors can still see a film at the Imax Cinema that was installed with the pavilion in 1974, as well as a slide on the Ice Palace Skating Rink that opens below the pavilion each winter. Outside of this last remaining monument at the World’s Fair, Riverfront Park offers many more attractions and places to visit, such as the striking Spokane Waterfalls and Waterfalls that are the highlight of many visits to Spokane.

As an impressive display of power and natural movement, Spokane Falls draws visitors year-round, although the best time to see these high-flow falls is spring when the thaw swells on the banks of the Spokane River. As well as admiring the falls from the many stationary vantage points along the trails, the best way to see them is by hopping aboard the Spokane Falls Skyride which gives you an unparalleled view of the rushing waters. Once you’ve toured the falls, the historic Looff Carousel is also worth checking out; the interactive sculpture walk; and the 1902 clock tower, which is the last remaining structure of the Great Northern Railroad Depot that once resided.

It’s not just the things to see at Riverfront Park that make it a top attraction. But also everything to do. The paved 37-mile Centennial Trail leads east and west from the park, and a host of community events and festivals can be found on the grounds throughout the year. Throw in the River Park Square setting of the downtown shopping district and unique lodging options like The Historic Davenport Hotel nearby, and it’s easy to see why all the Spokanites would agree that Riverfront Park is one of the best attractions in all of the world. Washington state.

2. Northwest Museum of Art and Culture 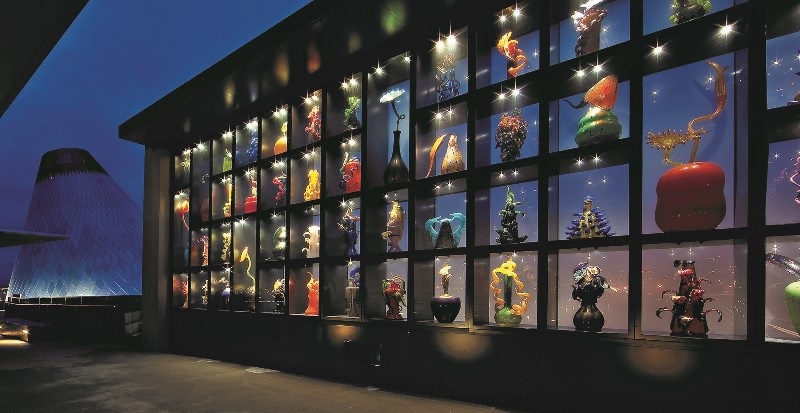 The Northwest Museum of Art and Culture, or MAC. As the locals call it, is the largest cultural institution of its kind in the Inland Northwest. With five underground galleries and rotating exhibits, MAC focuses on regional history, visual arts, or American Indian culture. And with more than a million artifacts in its collection, MAC can support a lifetime of learning. Outside of the exhibits, the Cafe Mac can keep your coffee full during your visit. And the adjacent Campbell HouseGuided tours of the MAC will take you back to a 19th century Washington way of life. Plan ahead for your visit to the MAC. And be sure to check their event calendar for all the different classes, workshops. Also speakers this amazing cultural organization offers.

In the scenic South Hill neighborhood, Manito Park has spent the last century cultivating itself as one of the best botanical gardens in the nation. Comprised of five main garden areas, including the remarkable Nishinomiya Tsutakawa Japanese Garden, and more than 20 acres of blooming flowers on display, it’s easy to see for yourself why Manito Park receives more than 150,000 visitors a year. Outside of the specified botanical gardens, Manito Park also offers more than 70 acres of maintained native landscaping, including attractions such as Mirror Pond for viewing wildlife, the Stone Bridge on Loop Drive for the best views of the rose garden, and Gaiser Conservatory for year-round reasons to visit Manito Park.

The first segments of the Centennial Trail. Also known as the Spokane River Centennial National Recreation Trail, were built in 1989. The same year as Washington’s Centennial Celebration status. Since then, it has grown to be nationally recognized. and a central point for recreation in Spokane. Stretching for 37 miles from any direction outside of downtown Riverfront Park, the paved road is open to anything but motorized transportation, and whether you choose running shoes, bikes, or skis on wheels, you’re sure to get a good dose of what Eastern Washington has to offer.

Built on old railroad routes and former logging company land. The Centennial Trail provides a fairly flat incline to explore the natural sights found in and out of Spokane. Stretching 15 miles west of Riverfront Park, the trail takes on rugged scenery, including scenic views and the celebrated Riverside State Park at the end of the trail. East of downtown Spokane, the trail winds through the collegiate atmosphere of Gonzaga University before traveling 17 miles to the Washington-Idaho border, where the trail continues another 24 miles as the Northern Idaho Centennial Trail. Although it is an option, users generally do not travel the entire Centennial Route in one exit. Instead, they choose to take advantage of the wide access to other recreational activities alongside the Spokane River, which parallels the entire trail.

5 Martin Woldson Theater on The Fox

The Fox Theater was the first air-conditioned building in Spokane and premiered its debut film in 1931 to a star-studded audience and large crowd. For the next 70 years, the Fox Theater hosted vaudeville performances, silent movies, and eventually talk shows. For this reason, the Fox was outfitted with a large stage space and a full orchestra pit. As well as balcony seating, to accommodate both live and projected performances. In 2000, the Fox Theater showed its latest movie. And it was scheduled to be bulldozed and replaced by a parking lot.

With a generous contribution from the daughter of Northwest railroad innovator Martin Woldson. Miss Myrtle Woldson effectively prevented the Fox Theater from being demolished. And helped renovate the space, keeping it as a defining cultural establishment in Spokane. The newly named Martin Woldson Theater on The Fox reopened in 2007. And since then it has been home to the Spokane Symphony and numerous live productions that keep Spokane first in Washington for catching operas, ballets, and other beautiful performances. arts.