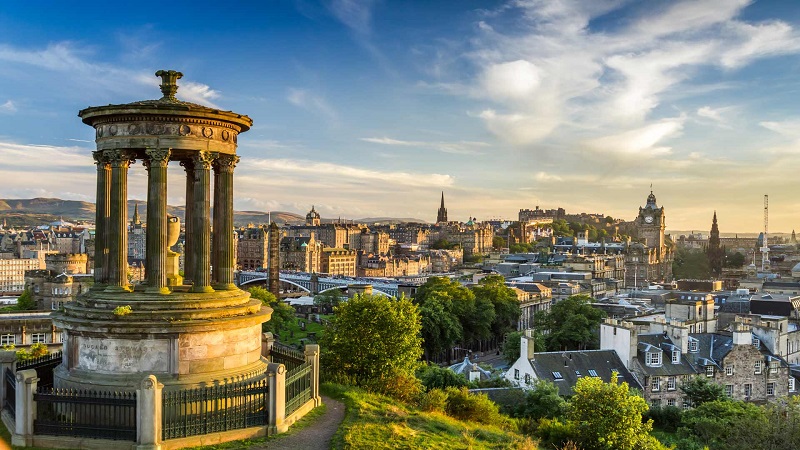 It is a country that presents different climates throughout the year, not only is it the gray and depressing sky that many people think. You can find a warm and colorful atmosphere from its people, its traditions, and its historical landscapes.

Due to this, each time of the year offers an excellent time to visit, depending on personal tastes; so you should investigate a little of the situations that may arise with each season of the year.

The land of the Celts has particular nuances in each region, so this must be taken into account, since a small distance that would be equivalent to traveling in a vehicle for approximately 20 minutes could mean a change of climate, and even very visible vegetation.

This is due to the geography of this country, since a large number of mountains causes the wind direction to change, making some regions wetter or drier than others, which directly affects the climate of very large areas or very small.

From May to September, some recommend visiting the country due to the warm temperatures, the forests and natural areas become lighter and outdoor practices are common; Also in areas like Edinburgh, there are festivals that attract tourists.

However, it is also the highest season in the region, so it requires booking well in advance, especially June, July, and August.

In autumn the temperature is not so cold, the days last longer than usual in other seasons, and some major festivals are held for free, and hotel prices drop considerably.

The winter months are also very attractive in Scotland, nature has an aspect that captivates the attention and festivals such as “Hogmanay” in Edinburgh are held, which is a three-day party and very typical of the city.

These types of events are so busy, it takes a long time to anticipate a hotel reservation.

In spring the days seem longer, the temperature changes and the rains begin to appear, more festivals are organized.

One of the most interesting attractions in Scotland with the different festivals that are organized throughout the year, so depending on the time you can find various events.

Burns’ Night: A night that is celebrated every January 25, in it dinner is held in honor of Robert Burns, one of the most beloved and popular poets in all of Scotland. Today it is a dinner in which all Scots go out to dinner at a restaurant typical food.

Samhuinn: the beginning of winter for the Celtic peoples that takes place on October 31 and is celebrated alternately with Halloween. In it, the participants dress up as characters from Celtic mythology and elements of nature. The combination of both parties makes it a unique show, especially when seeing the costumes in a parade.

Saint Andrew’s Day: every November 30 is celebrated the day of one of the 12 apostles and also patron of the Orthodox Church. It is also a celebration of Scottish pride for those who live inside, outside, and have Scottish roots. The history of the Scottish flag and the town of Saint Andrews are part of this very old tradition.

Hogmanay: The end of the year in Scotland has a more extensive meaning, it is 4 days and nights of parties in which all kinds of Scottish customs and traditions are displayed. A celebration that spread thanks to the absence of Christmas in ancient times. The highlight of the celebration is the burning of a wooden ship with fireworks followed.

The most interesting cities to visit in Scotland

Although it is not the capital, it is the largest city in Scotland and the most urban.

In this city, there are attractions such as The Lighthouse, a contemporary art museum, and a viewpoint to contemplate the city.

The urban art route that starts from the museum is a series of murals on the buildings that stand out for their color and creativity. There is also the Gallery of Modern Art, the “Merchant Square” and the artisan market, striking and curious on weekends.

The University of Glasgow, the Necropolis, Glasgow Cathedral; all of them architectural antiques that give the city a mysterious air.

A city with a particularly attractive charm during winter dates.

During this time the festivities are internationally recognized due to their long duration, as they extend for more than three weeks, counting only the time of the Christmas holidays, to which the New Year’s party is added; which receives the name of Hogmanay.

During all these festivities, Scotland and, in particular, Edinburgh, acquire a quite attractive sight due to the pleasant atmosphere generated by its inhabitants.

One point to consider when visiting the city during the Christmas holidays is the length of the days. The daylight time is very short compared to other places in Scotland, and the weather can be quite cold, so it is recommended to bring warm clothing.

The days start before 9:00 am, due to this, if you want to fully enjoy the attractions that are offered, you should consider getting up earlier.

Besides all this, the days end before 5:00 pm; So it is considered that before arriving in Edinburgh there is an agenda in which the activities to be carried out are already determined, in this way we will not lose valuable time, although this requires a little investment, a time before our vacation, it really is something that will be worth it.

Tomas Thorne October 24, Get Discount. cialis drug What is Modafinil.