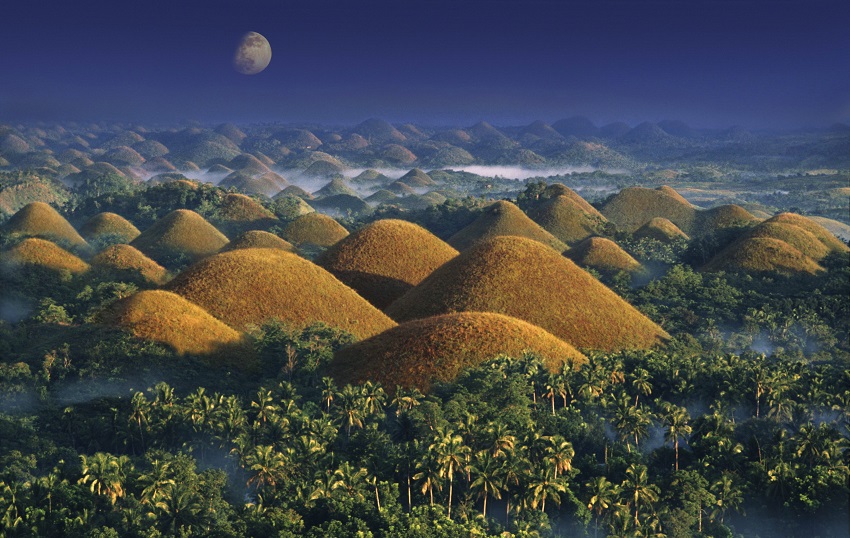 The 11 rarest places in the world

Our planet is riddled with unusual landscapes, natural spaces similar to Mars or colors that would delight Van Gogh himself. Be welcome to the 11 rarest places in the world. And watch out for Stendhal Syndrome!

It could be a dream of Dalí, the postcard of a fairy tale, the place where aliens and UFOs land, or have landed, a picture worthy of science fiction comics or the setting of a distant planet, but they are among us! If you are an avid traveler you will want to know the rarest landscapes in the world: in this article, we bring you a small sample of them since on Earth they are counted in handfuls, each with their secrets, stories, particularities, climate or culture.

If you pursue a tireless adventure, you want to discover the magic that emerges from its nature, photograph its unparalleled charms or explore the mysticism that emanates, then we tell you which are the 11 rarest places in the world. What are you waiting for to fill your backpack and look for a plane ticket?

The 11 strangest places on the planet

Immerse yourself in the driest desert in the world, remote natural crystal caves or hidden beaches. This is the 11 rarest places in the world. 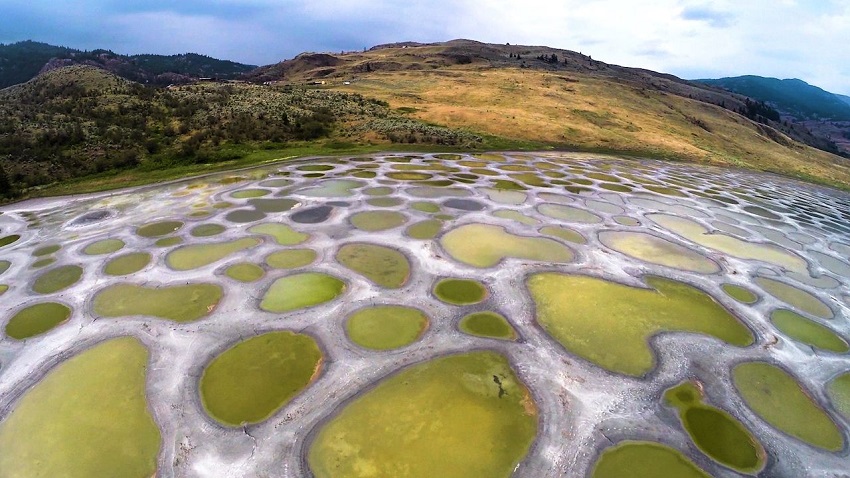 Spotted Lake is located in the border valley of Okanagan, a region formerly populated by native Indians. And which today remains one of the few Indian reservations in Canada. Also known as Lake Kliluk, its geometric shapes and its shining chromatic variety are some of its distinctive features. In total, it has 365 pools, especially visible when it is completely dry in summer since it is frozen in winter.

Hundreds of years ago, water was the healing and therapeutic remedy for the Indians, who created numerous legends around it. The changes in the colors obey their mineral wealth since it has magnesium, calcium, titanium or silver sulfate.

Pamukkale, the cotton palace in Turkey 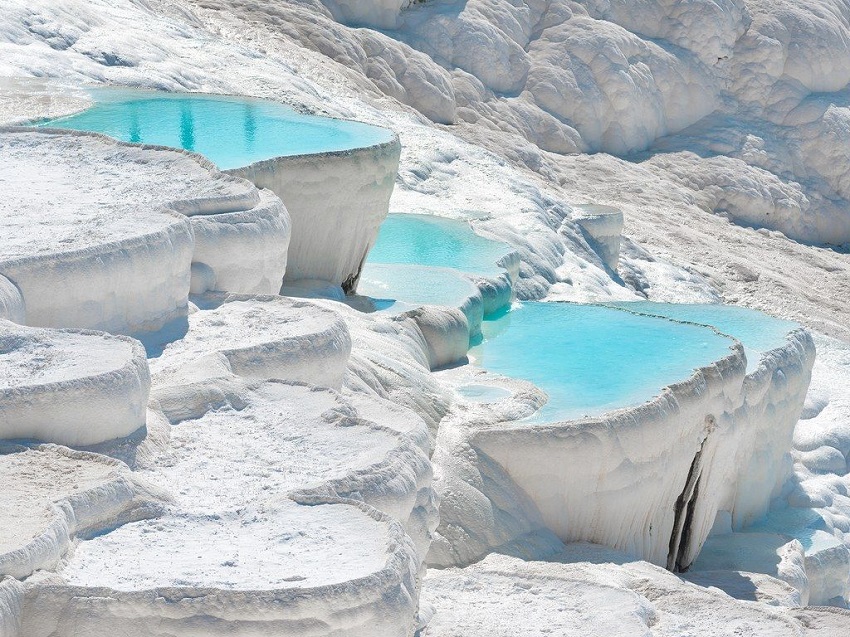 Precisely, Pamukkale means “cotton castle” and it is one of the most peculiar and beautiful places on the planet. With 2,700 meters of extension and a height of 160, this place seems covered with snow, but in fact it is in a temperate zone and the material that covers it is waste of calcium carbonate and different minerals from the water of its sources, solidified in the form of waterfalls and pools of limestone and travertine.

Thermal therapeutic waters and pink sunsets that will seem like a dream make up the attractions of this cotton castle declared a World Heritage Site by UNESCO next to Hierapolis, an old Hellenic city located on top of its mountain. 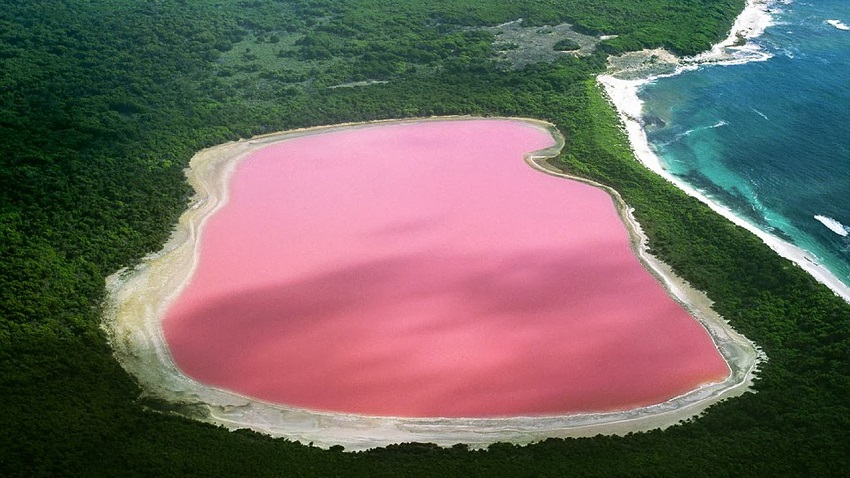 This wonder that you can see in the photo is an Australian lake of 600 meters long located on Middle Island, the largest island of the archipelago of La Recherche in the western part of the country. Although it looks like a fantasy manipulated by Photoshop, it is not: its pink color is permanent and does not change if it is poured into a glass.

Where does your unusual color come from? Of the presence of two bacteria that survive its high amount of salt: Dunaliella salina and Halobacteria. 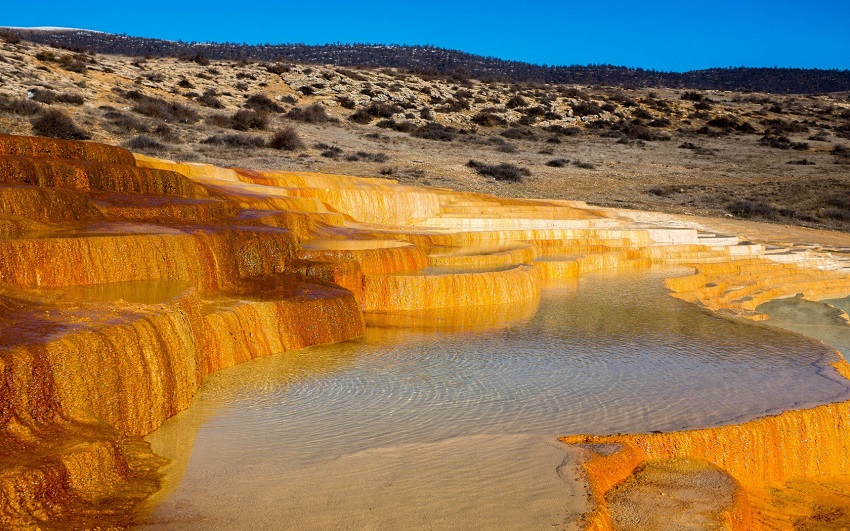 Badab Soort is a spectacular natural enclave in Mazandaran in northern Iran, located 95 kilometers south of the city of Sari and 7 kilometers west of the Orost village. Its peculiarity is its stepped formations of travertine terraces that have been created over thousands of years with cold water flowing from two springs of mineral thermal waters, responsible for depositing the carbonate mineral on the mountainside.

Rio Tinto, the Spanish flow that looks like wine 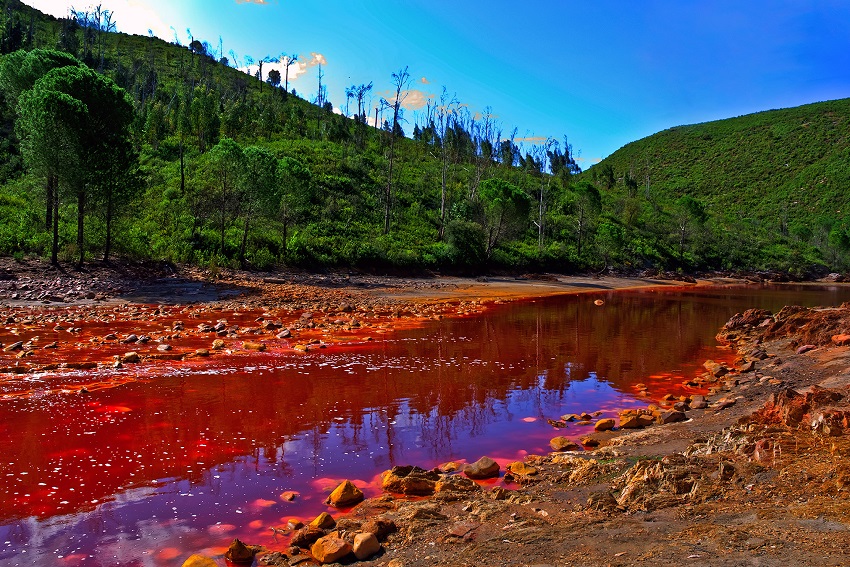 Its reddish color will amaze you, looking like you are in the middle of Mars or floating in a gigantic pool of wine. You will not have to travel many kilometers to see it. Since it is located in the south of Spain, along with the Andalusian province of Huelva, Andalusia.

The incredible red color of its flow is due to the weathering of minerals containing heavy metal sulfides along the river and its deposits. The pH of its waters is very acid and ranges between 1.7 and 2.7. Oddly enough, some species of fungi and endemic algae live in its waters, which is why NASA investigates it due to the resemblance to the waters of Mars.

Geyser Fly, when nature turns a human error into beauty 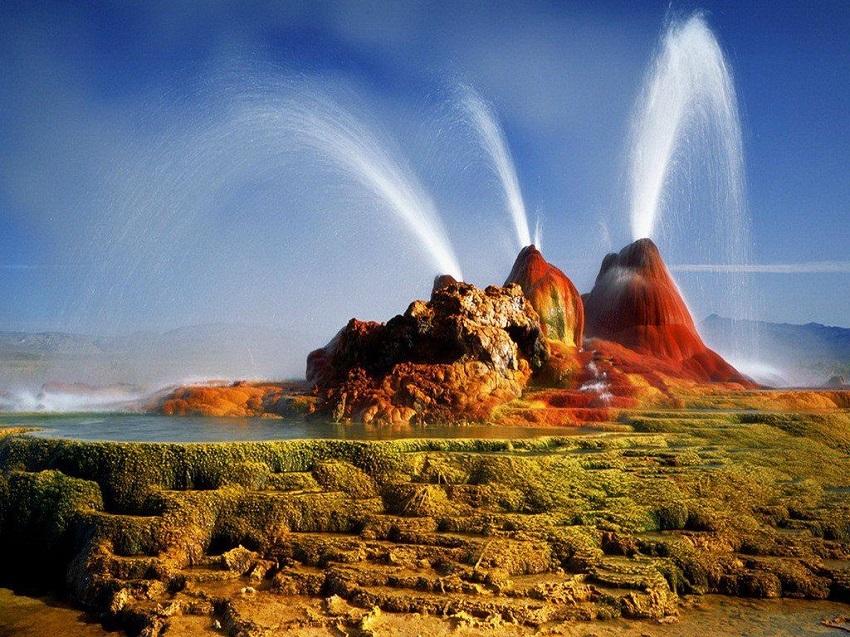 In 1916 an expedition drilled the land to find water for animals and crops in a deserted sector of Gerlach, two hours north of Reno, Nevada (USA). They hit the water, but with a thermal over 200 degrees. Although they covered it, they favored that years later a geyser emanated.

The extraordinary beauty of this enclave is that the calcium carbonate sediments have painted the rocks in such a way that you seem to be facing an impressionist painting.

Socotra, the enchanted island of Yemen 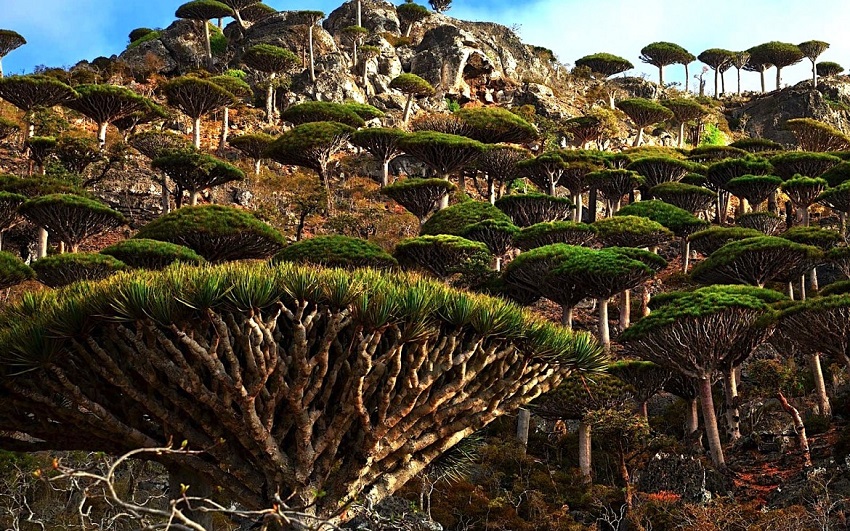 It seems like a lysergic dream or a dream experience, but it really exists. This is the island of Socotra, also called Socotra and known as the enchanted island of Yemen. Which is part of an archipelago formed by four islands in the Indian Ocean?

If you travel to it, you will probably see animals that look fantastic or completely unknown trees, because in their interior. And due to geographical isolation, there are about 700 unique species around the world. Which is why the archipelago was inscribed as a World Heritage Site of Unesco in the year 2008. 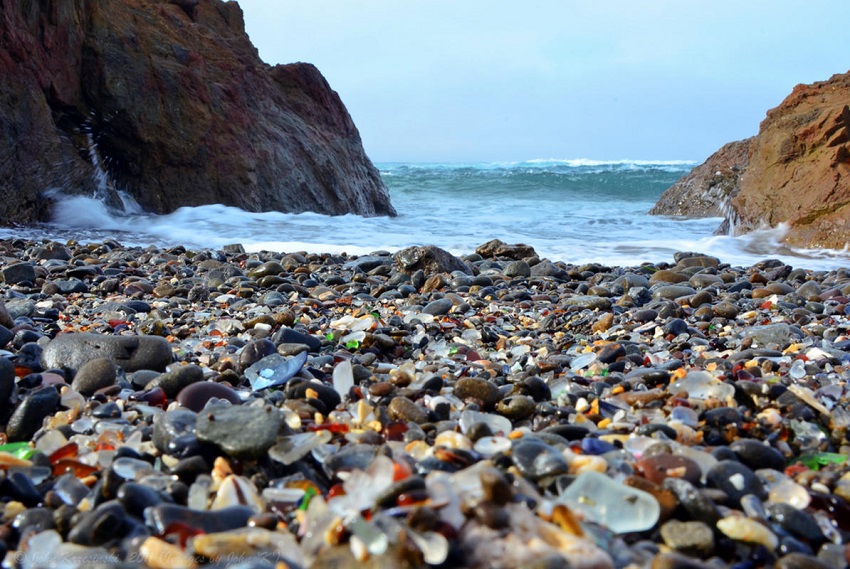 Glass Beach is a beach of particular origins and great singularity due to its glass sand of intense color and the presence of crystals. Its origin is unfortunate. Since at the beginning of the XX century during 61 years (between 1906 and 1967). The residents of Fort Brag used this location as a landfill called “The Dumps”. It is one of the rarest places in the world.

Although garbage was burned and cleaning days were held, it was natural that ended up doing its job. The effect of wave erosion caused the transformation of waste. From bottles to cars – into thousands of tons of small glass and ceramic crystals with incredible shapes and colors.

Valle de la Luna to feel like a selenite in Brazil 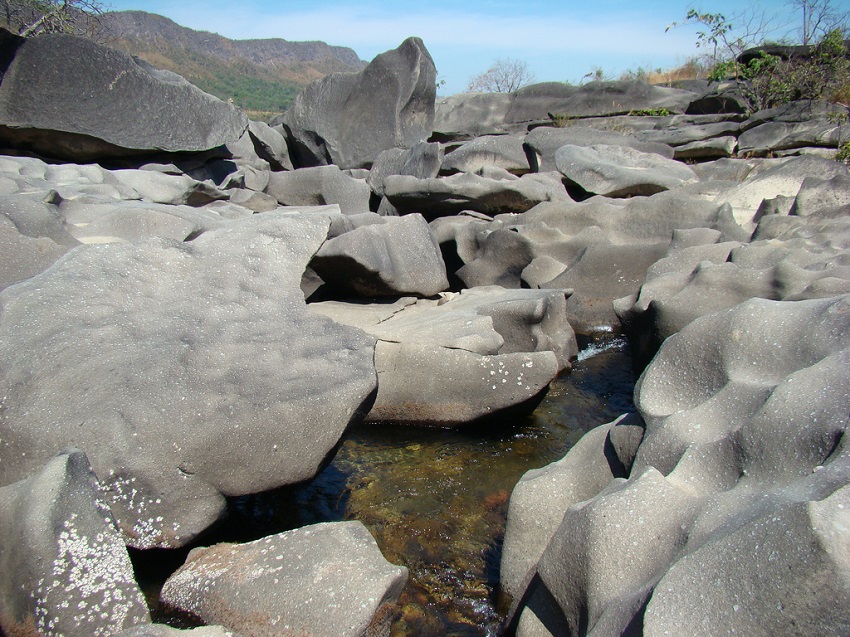 Located in the Chapada dos Veadeiros National Park, the Valley of the Moon, name given to more places in the world such as those located in Chile or Argentina, is a destination in which strange rock formations caused by the erosion generated by the waters stand out. transparent of Sao Miguel river. Walking there seems to walk through our nearest satellite. If you are lucky enough to step on this park, endowed with one of the oldest tropical ecosystems in the world. You will be amazed by stepping on its routes and touring its natural pools.

The incredible rice terraces in Yuanyang 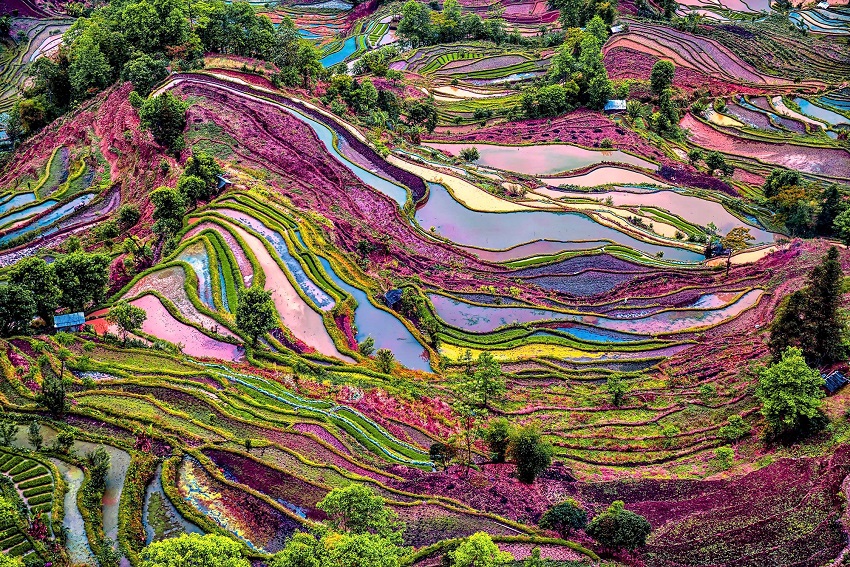 This incredible kaleidoscope of colors is nothing else than the Chinese city of Yuanyang. Which is located at the top of the edge of a mountain range, at about 1,570 meters above sea level. And as you can see in the photo, presents large crops of rice in the form of terraces.

The beautiful rice fields are functional since at least 1,300 years ago and due to the climate. Only allow an annual harvest, and its remote location is responsible for the environment has been preserved without alterations to this day. 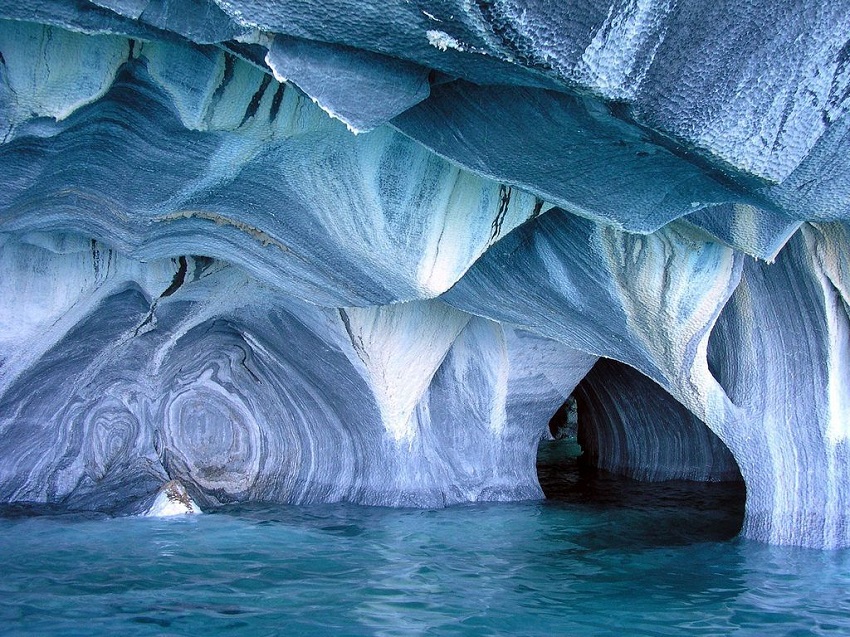